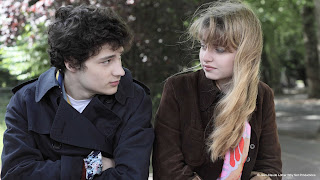 Director/writer Arnaud Desplechin's new film, French title: Trois souvenirs de ma jeunesse, is a prequel to his 1996 film My Sex Life...or How I Got into an Argument. My Golden Days was screened at the 2015 Cannes Film Festival as part of the Director's Fortnight section where it won the SACD Prize. Desplechin wrote the script with Julie Peyr which meanders through the memories of the main character Paul Dédalus (Mathieu Amalric) as he finally comes back to France. The movie doesn't seem to have a start or finish and their may be references to the first film to make some sense of some sections. It's two hours where you may find interesting, but like life, eventually doesn't really go anywhere.

Professor Paul Dédalus is an anthropologist working in Tajikstan is returning to Paris after many years abroad. He contemplates his past which the movie breaks down into chapters. There's the disturbing scene of him threatening his neurotic mother with a knife and sleeping on the top of the stairs to keep her from getting to his younger siblings. The mother (Cecile Garcia Fogel) later commits suicide and his father (Olivier Rabourdin) falls into a major depression leaving Paul to take care of Delphine and Ivan (Lily Taieb and Raphaël Cohen). When Professor Paul tries to get into France he's detained as there's a problem with his passport, which brings another memory of when he was involved in a trip to Russia while in high school. The younger Paul played by Quentin Dolmaire goes with his friend Marc (Elyot Milshtein) to smuggle money and documents including his own passport to give to some Jewish Rufuseniks.

The longest chapter comes when Paul goes off to his studies in Paris and returns to meet his sister's classmate Esther (Lou Roy-Lecollinet). They continue their long distance relationship with a series of daily letters. In Paris he begs a professor to take him as a student even though he's not quite qualified yet by suggesting that he will make the other students feel smarter. He spends all his time in the library, living in hostels or couch surfing at other people's home. The free form structure of the movie flits from one adventure to another involving his sister, Ivan, his younger cousin Bob (Theo Fernandez) and his best friend Jean-Pierre (Pierre Andrau). The long distant love affair with Esther becomes an open, quintessentially French, commitment with both Paul and Esther taking on other lovers. He racks up seven to her 15. Esther begins to lose herself and becomes totally dependent on Paul's love for her. While he's beginning to expand his life and moves to start working in his field. And now as an adult, he's finally realizing how these important relationships have affected him and have never been resolved. This sometimes aimless nostalgic trip sort of leaves one up in the air with only the credits to let you know it's the end. Kind of what real life does to you.
(Review by reesa)

Email ThisBlogThis!Share to TwitterShare to FacebookShare to Pinterest
Labels: My Golden Days review