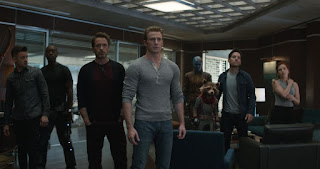 This one is it.

I can’t really touch into anything too specific, since there are people in the world who will hunt me down and take me out if I give away any of the slightest tidbit or nugget. Safe to say, one will not be disappointed in the very least. That is why I was not surprised to see all of those who perished in “Infinity War” a couple of years back, since I knew they were not gone for good.

What is also cool was seeing Brie Larson’s Captain Marvel save both Tony Stark and Nebula from their time floating endlessly in space. That is how she is introduced and brought into the Marvel fold. Her part is slated for seven more appearances in her contract.

She is a powerful hero, one that knows how to fight and stand her ground in battle.

I did like this movie, but was more impressed by both the stand alone sagas involving “Captain America: The Winter Soldier” in 2014 “Captain America: Civil War” in 2016. Both of those titles were helmed by the Russo brothers, Anthony and Joe.

The duo knows how to facilitate action sequences that are appealing and intriguing. The camera contemplates the greatness of eye appealing eye candy.

What is also cool to see is the last official scene of Stan Lee in a Marvel-related film. His part is just that of a passenger shouting with glee and excitement in a convertible.

The “Avengers” theme comes back into play with the Alan Silvestri score. Although not as dynamic as those of John Williams and his “Star Wars” score, they are very recognizable.

So readers know, “Avengers: Endgame” is not the end of the Marvel cinematic universe. It is actually the finale of phase three, of which there are numerous chapters.

The actual official end to phase three occurs with “Spider-Man: Far From Home” which his theatres in early June of this year. Further Marvel titles occur with the upcoming entries “Dark Phoenix” as well as “New Mutants,” which has been sitting on the shelf since the middle of last year. It has been finished, but both moviegoers and the studio are waiting for the appropriate time to release it.

“Avengers: Endgame” clocks in at three hours of length. Also, be warned there is no Easter egg for the end credits sequence. Nada, Zip zero. So readers know, the official time is three hours, one minute.


Grade: B+
(Review by Ricky Miller)