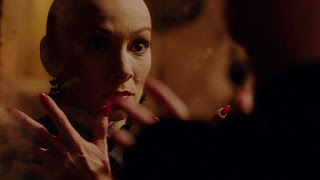 Writer / director Peter Strickland continues his obsession with European genre cinema of the 70s with his latest film “In Fabric.” It’s a giallo-esque thriller which features a similar onslaught of colorful, intense visuals mixed with an overbearing soundtrack familiar to fans of the genre. Except, instead of the killer being a mysterious black-gloved figure, it’s a vibrant red dress (labeled “Artery Red” in the department stores catalog).

The film opens with a stylish credit sequence, the movie’s credits plastered over department store imagery, before moving into the story of Sheila (Marianne Jean-Baptiste), a divorced mother of one living in a house with her son, Vince (Jaygann Ayeh), and his rude, goth-like girlfriend, Gwen (Gwendoline Christie). Sheila’s decided to start diving into the dating pool again. She enters into Dentley & Soper, a department store flooding the TV with odd, occult-like commercials advertising a massive sale, to buy a new dress for her first blind date. There she interacts with a bizarre saleswoman (Fatma Mohamed), who speaks in confusing and threatening riddles and sells her a red dress (oddly not Sheila’s size but one that still fits her perfectly).

Her date does not go well. The man she meets is aloof, blatantly ignoring the questions asked to him by both Sheila and their waiter, and, to make matters worse, the dress is starting to leave an angry rash on her skin. Throughout her date Strickland cuts to imagery of Mohamed, who acts just as bizarre in her off-hours. The saleswoman is seen tenderly removing her wig before climbing into a low rectangular dumbwaiter and lowering herself to who-knows-where (her destination is revealed in the film’s concluding scene). This bit of strange behavior is the least of the staff’s oddities. The saleswomen are often scene fondling the mannequins – in one scene caressing a mannequin until its vagina begins to bleed, overseen by the masturbating manager (Richard Bremmer) who’s just as peculiar as the rest of his staff.

The dress (often shot in lush, shadowy close-ups focused on the fabric’s folds) begins to haunt Sheila. It is often shown floating or moving on its own, shot in a way to make this not seem as ridiculous as it sounds. Sheila decides to rid herself of the object but her attempts to return the item are met with annoyance and still more bizarre riddles from the staff.

The actors do a phenomenal job of portraying their characters. Mohamed is natural with the deliveries of her cryptic sales pitches and disjointed movements. Jean-Baptiste conveys her role as the put-upon mother ready to rejuvenate her life, causing the audience to care about her character through her unusual circumstances and interactions with the supporting cast around her – more specifically the cruelty of Gwen and the start of her relationship with eventual boyfriend, Zach (Barry Adamson).

Cinematographer Ari Wegner beautifully lights and frames the feature, capturing the lush backgrounds of Sheila’s home and the world of the department store. Colors appear bold on screen, an elaborate green-hued paisley wallpaper pops against the actors in the foreground and the sales-people are shot with sinister shadows darkening their faces. Composer Cavern of Anti-Matter creates a score that feels like it’d be right at home in the cinema of the 70s, perfectly accenting and drawing the audience in to Strickland’s world.

Strickland should have concluded with Sheila’s story. Instead, he finds it a good idea to turn the narrative of “In Fabric” into a story similar to that seen in films like “Winchester ‘73” and “The Red Violin,” following the cursed object to a new set of owners – young couple Reg (Leo Bill) and Babs (Hayley Squires). The change in characters feels abrupt and unwanted, needlessly causing a film that felt like it was in its concluding moments to suddenly start anew.

This second act, while shorter, makes “In Fabric” feel like it’s forcing the audience to watch an unnecessary sequel, allowing these new characters to interact with the same people that Sheila did in the movie’s first act. Reg goes to see Stash (Julian Barratt) and Clive (Steve Oram), a different set of oddball characters that Sheila, who works in the bank with them, is also forced to interact with. The two men ask both characters to describe their recent dreams to them, the descriptions seeming to give both men an orgasmic rush. Babs returns to the department store, where she’s asked to leave once the saleswoman (Mohamed again) notices the red dress she’s got on.

Answers are never given to the film’s many questions – not that they are necessarily wanted. Are the workers of this department store a coven of witches? What motives do they have for selling this dress and are the other clothes on sale in the store having a similar effect on the other patrons?

“In Fabric” could have been considered a new masterpiece of the genre if it had focused solely on the opening act. Instead, Strickland tries to give too much turning a good thing into a bad one, wearing the audience down with the films second act. “In Fabric” is still a film worth checking out for its positive attributes, most obviously the cinematography and its soundtrack, but the negative aspects really bring this one down by it end.
(Review by Bret Oswald)