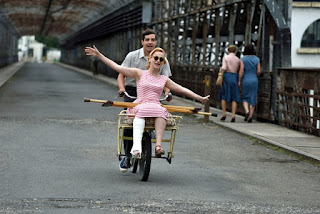 Solely titled “Suitor,” this film serves as a friendly reminder that sometimes it does pay to do your homework before going to see a movie. The movie I had originally intended to see was rescheduled for a much earlier time so I decided to see this one instead, looking no further into it than its scheduled start time, title, and country of origin (Czech Republic). Before and during watching, I had no idea that this movie was the concluding chapter in a trilogy – implied by the title card at the start of the film but not known for sure until looking it up online later. As a result, this might not be an entirely fair review since I have not seen the first two movies that “Suitor” is a sequel to.

Taking place in the late 1950s, city girl Daniela (Anna Fialová) meets and falls in love with country boy Mirek (Ivan Lupták) while staying with her aunt and uncle over the summer. Daniela’s father Jindrich (Martin Finger) is furious, wanting his daughter to end up with an educated man to better her place in society. Frustrating the rest of the family, especially his wife (Anna Geislerová) and Daniela (obviously), he continually goes out of his way to ensure that his daughter’s relationship does not work. Jindrich reschedules his war group meetings (a political group against the current communist regime of Czechoslovakia) for Saturdays to interfere with Daniela and Mirek’s weekly date night and he tries multiple times to force his war buddy’s son, Slavek (Jachym Kucera), on her.

As a stand-alone movie, “Suitor” doesn’t quite work. It’s assumed that viewers are already familiar with these characters. There are several people introduced who are given little to no introduction as to how they are connected to the other characters. Events and objects are mentioned that were more than likely involved in the first two movies. One of Daniela’s aunts hugs a teddy bear at the end of the film with the stuffed animal shot in a way that makes it obvious that it is meant to have some visual connotation for a past event.

The fact that “Suitor” is the third part of a trilogy could also explain why it seemed there were so many unnecessary subplots. Toward the film’s conclusion a subplot involving Jindrich finding out that one of his friends has snitched on him is brought up only for it to be quickly resolved a few scenes later. The sequence feels completely unnecessary in relation to the rest of the story. It might resolve things brought up about these two in the previous films but in context of this movie it does little more than draw out a film that was already starting to drag.

Though “Suitor” isn’t a particularly good movie – easily forgettable by the end of a day full of watching other films – it’s still fairly well made. The camera work is well done and the mellow, jazzy score featuring a muted trumpet, piano, and percussion helps to set the tone. The actors do a good job with their roles. Fialová and Lupták’s relationship feels natural and Finger really sells his portrayal of her overbearing father, just the sight of the character becomes unwanted. But, all things considered, this is one best left unwatched.
(Review by Bret Oswald)