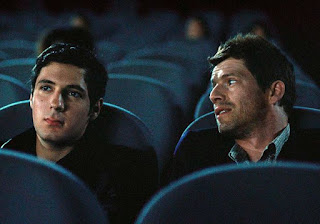 SORRY ANGEL
*** (out of ****)
The contradiction of Sorry Angel is that not much happens within this story of two men who find love with each other unexpectedly, yet within that romance, everything happens. This is something of a delicate, affecting travelogue through an entire arc of a romance, with writer/director Christophe Honoré affording well over two hours to that arc. We get the meet-cute, in which each participant is immediately and inexorably drawn to each other, all the way through the point at which both men have reckoned with the reality of their distinctive circumstances.

The final scenes, by the way, won’t be revealed here, but let us only say that Honoré offers these men different paths that are entirely within character for both of them. The story takes place within a specific time, which is about a decade into the AIDS crisis that paralyzed the 1980s. It’s the mid-90s here, as we see posters for 1993’s The Piano and the timely performance of Orlando by Isabelle Huppert (which ran from 1993 to 1995). There is clearly more cultural and societal understanding, then, of the ravages of the disease on people, particularly those within the queer community.

Jacques (Pierre Deladonchamps) has seen those effects firsthand. His ex-partner Marco (Thomas Gonzalez) has left a message stating that his health has taken a dramatic turn for the worse near the beginning of our story. He moves back in with Jacques, who is an author of some renown in Paris but, currently, doesn’t seem to have any more books in the works. Jacques’ roommate Mathieu (Denis Podalydès) doesn’t think this is a good idea, and indeed, it turns out not to be for anyone involved – not Jacques, not Marco, and not Jacques’ young son (played by Tristan Farge), who came from a very different part of the man’s life.

At the same time, Arthur (Vincent Lacoste), a student from Brittany, is living his life as a closeted bisexual man, preferring the company of men but spending a lot of time in bed with Nadine (Adèle Wismes). She seems to get the picture, and Wismes is quite good as a young woman who very much loves her companion but cannot deny the burgeoning understanding of his sexuality the respect it deserves. Arthur meets Jacques in a movie theater showing some vast epic of sorts. The former pretends to find the film respectable but bored. The latter encourages him to stop pretending. That kernel of honesty from the older man is, perhaps, the first sign of a future between the two.

Thus begins a romance depicted with a great amount of honesty and sympathy, especially as they do not live near each other and bed different people in the interim. The performances from Lacoste and Deladonchamps are exceptional in the way the actors are able to convey a lot through blank-slate expressions and emotionally repressed dialogue, leading to a confrontation in which Jacques, now struggling with failing health, and Vincent, faced with a decision, showcase enormous support for each other by making an argument for extended absence. It’s a lovely moment, and such lovely moments anchor Sorry Angel and its lazy-day structure.
(Review by Joel Copling)