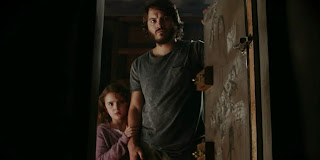 Seven-year-old Chloe (Lexy Kolker) lives alone with her father (a scruffy man known only as Dad, played by Emile Hirsch). The house they live in (a dilapidated, chaotic mess with newspapers taped over the windows) makes the father-daughter duo appear to be living in a post-apocalyptic scenario. Dad seems on edge and paranoid, reprimanding Chloe for wanting to go outside. He warns her of the bad people out there who want to kill them, reminds her to let him know if she ever cries tears of blood, and rehearses a backstory for her if she’s ever asked any questions.

The opening segment of “Freaks” is packed with things that don’t quite make sense. When Dad falls asleep the reality around him seems to alter, his body unleashing a wave that causes the room to appear suddenly brighter. Chloe sleeps in the house’s dark, creepy attic in which Dad has set-up a hidden, lockable closet, which Chloe is supposed to hide herself in if they are ever in danger. Chloe’s closet isn’t the safe, secure place her dad intended. Inside, she often sees a screaming ghost (Amanda Crew), whose presence sends her fleeing from the closet while covering her ears and crying out for it to go away. Though this ghost isn’t the only thing to appear to her in there.

Outside the house is a pleasant looking street, suggesting that a bright, cheery world lurks just out of Chloe’s reach. From a window, Chloe observes a mysterious ice cream truck driver, Mr. Snowcone (Bruce Dern), selling treats to children on the street. While no one else seems to pay attention to their house, he seems aware of Chloe’s gaze. Even taking into account Mr. Snowcone, this view of the outside world doesn’t mesh with the world Dad is painting for his daughter. Why doesn’t he want her to go outside? “Freaks” slowly fleshes out its story as its naïve star begins to discover the truth of the world around her.

Kolker, making her acting debut, plays her part well. Her portrayal of Chloe is convincing, showing the young girl’s growth away from innocence throughout the movie. Though her performance does become grating at times. Writing / directing duo Zach Lipovsky and Adam B. Stein manage to do a lot with a limited budget. They create a mostly realistic, believable world for their characters. Lipovsky and Stein take the time to ground their film’s reality before fully revealing its supernatural aspects, allowing the film’s final act to feel like a natural extension of what’s come before.

“Freaks” is the sort of film that works better the less first-time viewers know about it. In a way, the movie feels similar to Jeff Nichols recent sci-fi mystery “Midnight Special.” Except, “Freaks” isn’t as frustratingly dense or infuriatingly opaque as Nichols’s movie. Lipovsky and Stein keep the audience in the dark as much as they can without pushing them away, walking the fine line between captivation and lost interest.
(Review by Bret Oswald)