DallasIFF2019 - Leave the Bus Through the Broken Window 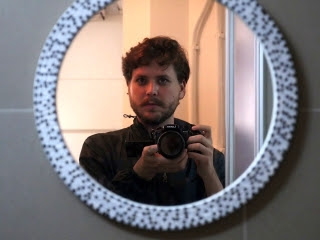 LEAVE THE BUS THROUGH THE BROKEN WINDOW
**½ (out of ****)
Having recently broken up with his girlfriend, Andrew Hevia embarked on a project to explore the Hong Kong art scene. Arriving there with little money and less preparation, he found himself ill-equipped to explore such a scene: He had never learned Chinese history or to speak the language of the region, and the apartment he was able to afford was comprised of two small cubbies (the living area on the bottom and a bed positioned on top) for a total living space of forty square feet. Leave the Bus Through the Broken Window is as much an exposé of the local art world as it is about his experiences trying to find an entryway into it.

The first thing one notices is that the writer/director refuses to adhere to the traditional rules of documentary filmmaking. The narration, which complements the imagery instead of leading it or simply relaying what we are seeing, is delivered via the automated voice of a dictation program. The voice that Hevia adopts is second-person, placing the viewer in the shoes of the filmmaker and intentionally causing the unnerving feeling of being the one to and with whom everyone is talking. We hear Hevia’s actual voices only once here, and it isn’t in the context of narration but in the background of a scene late in the film.

That choice of narration, then, is a bit of a joke, and it is pretty funny, especially when Hevia gives the robotic voice a few choice curse words to speak. The gimmick, though, wears a bit thin as the filmmaker proceeds to rely entirely upon it to tell this story of exploration, discovery, and the cultural divide between filmmaker and subject. The result is that he feels more than a little bit out of his depth. As potentially fascinating as these ideas are, the director hasn’t quite honed his craft to convey it convincingly. The camera is quite clearly of the digital-home-video variety, and the images are subsequently lo-fi and almost voyeuristic in nature.

As for those ideas, they arrive inherently with the kind of experience Hevia has here. He stumbles through the streets of Hong Kong, meeting various artists but sometimes unable to capture their art on video in the way he would like. We get names and faces here, but because of Hevia’s rush to record everything, they rather blur together eventually. One man paints images from popular Chinese movies of the past. Another uses plantlife to enhance a work of landscape art. An installation piece involves statues looming from atop buildings, which is rather creepy in the night sky. The art is interesting, and Hevia has made his own installation piece of sorts. With its unique approach to documenting an experience, Leave the Bus Through the Window nearly elevates itself. Then there is the undeniable feeling that it only scratches the surface of Hevia’s own ideas.
(Review by Joel Copling)

Posted by Dallas Movie Screenings at 11:39 AM

Email ThisBlogThis!Share to TwitterShare to FacebookShare to Pinterest
Labels: DallasIFF2019, Joel Copling, Leave the Bus Through the Broken Window review