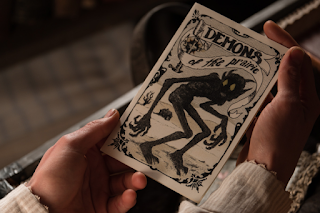 “The Wind” opens with a couple of men, Isaac Macklin (Ashley Zukerman) and Gideon Harper (Dylan McTee), standing outside a house, only the sound of passing wind is heard. A woman, Isaac’s wife Lizzy (Caitlin Gerard), emerges from the door, her clothes covered in blood. In her hands, she carries a small wrapped bundle which she hands to Gideon, who howls in anguish as he walks off screen with what we now realize is his stillborn child.

Following this opening scene, screenwriter Teresa Sutherland shifts the timeline back to the arrival of Isaac and Lizzy’s new neighbors, Gideon and his wife, Emma (Julia Goldani Telles). Gideon and Emma are a newly wed couple who have come to the frontier of New Mexico, circa the late 1800s, to start their life together, a task that they are obviously not prepared for as they both seem overwhelmed by the advice Isaac and Lizzy give them. It should be mentioned that the only two houses for miles are those of both couples and their houses are separated by some distance. The Harper’s house is small on the horizon when Lizzy looks out her door.

Sutherland takes a non-linear approach to the story, slowly unspooling the narrative as it jumps between the events leading up to the birth of Emma’s child and the events following it. While the non-linear approach has grown to be over-used, it is well handled within the movie. The device allows the film to become slightly more unpredictable (emphasis on the word slightly) once it’s realized that the opening scene isn’t going to be the conclusion of the movie. Left isolated and alone by her husband, who is taking the grief-stricken Gideon back to the city, Lizzy finds herself tormented by a dark, menacing presence.

Director Emma Tammi doesn’t fall for the usual jump-scare traps of the horror genre, although there are a few of those moments. Ghosts do pop-up out of nowhere, they just don’t look very frightening and they aren’t accompanied by the typical loud orchestral punch. The ghosts that haunt this stretch of the New Mexico landscape, beautifully photographed (and the best thing “The Wind” has to offer) by cinematographer Lyn Moncrief, are tepid frights, made up like ghouls from a low-budget children’s TV show. The movie isn’t helped by the unconvincing performances from the actors, not that the horror genre is known for its accomplished acting.

Tammi takes the slow-burn approach with her movie. Despite the constant time jumps, Tammi crescendos the action to the film’s conclusion – think the approach director Ti West took in movies like “The House of the Devil” or “The Innkeepers” – so that both timelines hit similar emotional levels simultaneously. Though the narrative feels like it’s going to go in an unexpected direction, it ultimately comes to a trite conclusion.

There are good ideas present in “The Wind” but in the end it doesn’t work well. It’s not very frightening and the pay-off isn’t big enough for the build-up. Also, some of the synopses online give away more than they should (for sure the plot description on IMDB) so if you are interested in watching this one it’s best to avoid reading too much about it beforehand.