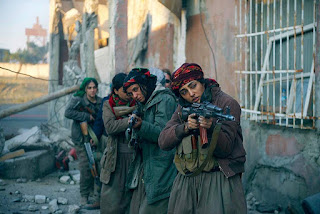 GIRLS OF THE SUN
** (out of ****)
Girls of the Sun is not explicitly based on true events, though one can imagine that the story could be based in truth. Perhaps it is only wish fulfillment, but the existence of a group of Kurdish women, who were formerly captives of ISIL, forming a battalion to fight back against the forces who imprisoned them would be extraordinarily empowering. Surely, a group like this one does exist somewhere, and Husson has made a serviceable attempt to pay tribute to such a group.Those achievements are all in the broad strokes, of course. Assessing the film on its specific merits is a bit less rewarding, and that’s a shame.

Husson’s screenplay (in collaboration with Jacques Akchoti) starts as the story of Mathilde (Emmanuelle Bercot), a combat journalist whose appearance and demeanor seem specifically based on Marie Colvin (from the eyepatch to rumors of a major event in Homs, Syria). She arrives somewhere in Northern Kurdistan, intending to follow a group of women who have escaped captivity with ISIL, trained as soldiers, and formed a squad of militant vigilantes with minor support of the local military.We learn a little about Mathilde over the course of the story, such as the fate of her husband a few months before the beginning of this tale and the custody of her daughter at the hands of her parents.

The film is so devoted to telling Mathilde’s story that it is bookended by extended sequences from her perspective. Everything between that, though, is dominated by group leader Bahar, played by Golshifteh Farahani in a performance of breathtaking endurance (Note the way, in one scene, she dispatches a faceless enemy and keeps yelling for just a second-and-a-half longer than the act necessitates). We learn a bit more about Bahar, whose family has been ripped apart by ISIL in front of her eyes. Extended flashbacks reveal the breadth of the character’s endurance, too, in particular the maternal and militant roles she plays.

The film, though, seems indecisive about which of these stories it wants to tell in the beginning, and in the process, it does neither of those stories any favors. Mathilde remains something of a cypher, having only a single scene devoted to why she has become a war correspondent. Bahar comes out a little better, but her story is consistently used as a narrative device, with those flashbacks (which are quite extended, indeed) providing all the information but not really establishing a useful or insightful perspective. The singular point of Girls of the Sun is the horror of its story, and although that doesn’t mean the film is empty in any real way, it does only provide a single layer with which to work.
(Review by Joel Copling)