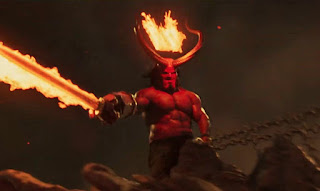 Neil Marshall’s rendition of “Hellboy,” takes full advantage of the MPAA’s R-rating in that he relishes the violence factor throughout the running time.

This one does not have Ron Perlman, rather David Harbour of Netflix’s Emmy-winning “Stranger Things” as the title character, who lives in a place all his own.

Ian McShane of TV’s awesome “Deadwood” as well as “John Wick” is Hellboy’s father, professor Boom. He essentially oversees the Bureau for Paranormal Research Defense of which Hellboy is involved with in some capacity. Like the very inventive “Men in Black” franchise they are just a fictional part of the federal government.

Early on in the movie, a giant indiscriminately rips off the lower jaw of one of the priests on the grounds of the church in the middle of the countryside

Milla Jovovich of countless “Resident Evil” entries is the villain of the tale, an evil sorceress known as Nimue, aka The Blood Queen. Early on in the movie, she is dismembered and cut into various pieces and spread across the land during the reign of King Arthur.

Mark Stanley provides the necessary support as King Arthur earlier in the tale. Same goes for Brian Gleeson as Merlin, who knows about the various tricks of the trade

She thinks that being with Hellboy would be the perfect match, but Hellboy completely disagrees with that notion. He says that he is a “Capricorn,” and she is just fn’ nuts.”

Also involved in the storytelling tale are various ghouls, ugly entities and disfigured witches galore. One scene also involves a witch eating parts of a child in a stew.

Her identity is that of a creepy disfigured peg-legged old woman who just lives for the moment.

Marshall has done some great films, notably his sophomore effort, 2005’s “The Descent.” Although that was a horror entry, it had some dynamic storytelling techniques involving a group of friends encountering some netherworld blind zombies. He also was Emmy nominated for a couple of episodes of HBO’s “Game of Thrones” in 2012 and 2014.

Besides Marshall, another writer comes into the fold with Mike Mingola, who created Hellboy many years ago in a Dark Horse comic book of the same name. His writing captures the inventive fantasy dynamics that encapsulate the planet this new incarnation of Hellboy and the world it currently inhabits.

The rest of the cast, including Daniel Dae Kim (“TV’s “Hawaii-Five-O,”) Penelope Mitchell, Sophie Okonedo (Oscar nominee for “Hotel Rwanda”(2005) and Sasha Lane (“Hearts Beat Loud”). All fit the bill and are suited for the complete storyline.

I had such a good time watching these denizens fully embrace all of the characters and their identities. I just smiled all the way until the last frame of celluloid ended this engaging story.

When it comes down to it, “Hellboy” does what it’s supposed to do and just entertain the audience for a solid 2 hour spell. The $50 million budget shows up on the big screen, since one witnesses giants storming down the river Thames.
(Review by Ricky Miller)