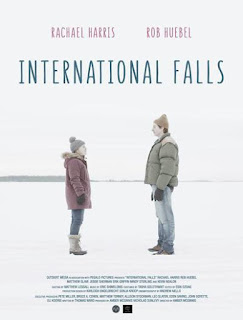 For a movie labeled as a comedy, “International Falls” is surprisingly unfunny. Although its two lead characters are comedians, the lackluster Tim (Rob Huebel) and wannabe Dee (Rachael Harris), their featured stand-up routines do little to elicit laughs from the audience. It’s best to think of the film as a drama, a character study more than anything. Adapted from a play, “International Falls,” directed by Amber McGinnis, follows the duo’s brief affair. Their relationship, originally a one-night stand in Thomas Ward’s stage version (Ward also wrote the movie’s script), is expanded into a weekend fling for the film.

Dee works in a small hotel in International Falls, Minnesota. Bored with her current work and life, she dreams of someday changing careers and becoming a stand-up comic, held back by her demands as a wife and mother. She surprisingly finds herself drawn to the grouchy comic Tim, checking into the hotel as their weekly featured guest. After preparing and eating dinner with her family, Dee returns to the hotel for Tim’s set. After his set, she pretends to be drunk and flirts her way into his room. Their initial, unsatisfactory, intimate encounter ends with Dee beginning to drive home before deciding to turn around and stay the night.

What begins as an awkward meeting ends up with the two forming a natural bond. Dee declares her desire to become a stand-up comedian, eagerly eating up any advice Tim is willing to give her, while further divulging her dissatisfaction with her current life between her dead-end job and faltering relationship with her husband, Gary (Matthew Glave). Meanwhile, Tim reveals his true feelings about his career choice, blaming the constant travel and his lack of talent making him miserable and ultimately destroying his marriage due to a previous affair while on the road, and informing Dee that his next show will be his last. As their affair continues, it becomes apparent that through different circumstances they have come to be in similar psychological situations, allowing their bond to grow on an emotional level over a physical one.

Harris and Huebel have a natural ease that causes their relationship to feel believable. Their unhappiness is apparent through their portrayal of their characters, with each seeming to find a similar hint of hope in their connection with the other person. While the performances are good, “International Falls” ends up feeling like just another indie movie. The cinematography features a loose, shaky look frequently found in low-budget films of this nature. And, for the most part, the script follows the expected story arc – an event toward the end will probably surprise most viewers.

Dee and Tim’s relationship may be believable but it isn’t enough to make this movie an entirely engaging or entertaining one. Tim’s few stand-up routines are, understandably, unfunny. They wind up coming across as filler, attempting to elongate an already short movie with material whose message could have just as easily been conveyed in a shorter scene. Although it’s not an altogether terrible movie, “International Falls” begins to feel about as unwanted as one of Tim’s stand-up routines.
(Review by Bret Oswald)