DallasIFF2019 - Shoot the Moon Right Between the Eyes 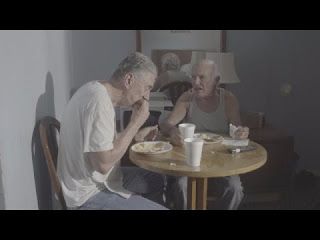 Elderly con-artists Jerry (David Kendrick) and Carl (Sonny Carl Davis) have worked their way across Texas, tricking multiple women out of their money. The two have begun working on their supposed final job when Jerry falls in love with the target, the waitress Maureen (Morgana Shaw). Unknown to the two, their previous target’s ex-boyfriend, Les (Frank Mosley), is a private investigator, hired to track down Jerry (who apparently does the wooing while Carl - whose existence is unknown to Les and his ex – sits on the sidelines) and her stolen money. The alcoholic Les slowly closes in on the two men as they work on the unsuspecting Maureen.

“Shoot the Moon Right Between the Eyes” is an odd piece of cinema – a low budget country / folk musical western based on a short story by James Joyce (“Two Gallants”), featuring the music of John Prine, and starring mostly older actors. While first time writer / director Graham Carter has an intriguing concept for his feature debut, it’s one that never works.

The cinematography, shot in the now almost entirely unused Academy ratio (think television screens before everything went to widescreen HDTV), looks cheap – a forgivable distraction given the film’s extremely low budget. Carter opens the film by listing four directors. Only one name – Edgar G. Ulmer – stuck in my brain due to being somewhat familiar with a few of his movies. Ulmer’s mention is suitable since he spent his career making mostly low budget affairs.

Carter builds his cast with actors who have long resumes but aren’t instantly recognizable faces, bit time players getting a chance at bigger roles in a smaller production. Unfortunately, Carter isn’t able to get good performances from his cast. Davis and Kendrick’s performances often come across as forced, with Davis becoming particularly goofy in some of his scenes. Frank Mosley doesn’t even win you over with his portrayal of the bumbling P.I., who fortuitously manages to stumble his way across the con-artists trail.

Shaw and Kendrick romantic relationship, arguably the central focus of the movie, doesn’t have any spark. Earlier in the movie, before Jerry starts courting her, Maureen catches Jerry and Carl spying on her, the inept pair barely hiding behind a truck parked outside her house. She already suspected these guys were up to no good, why does she still agree for a date? It’s a relationship you know won’t end well and, in all honesty, don’t in the least bit care about.

This all leads to the film’s cringe-worthy musical numbers. None of the cast members can carry a tune, yowling their way through the arrangements of Prine’s music. While most of the numbers feature the performers just standing there, one lamely makes a failed attempt at more interesting choreography.

As bad as the musical sequences are, a couple scenes do show some promise for Carter. In these scenes, Carter opts to film the actor or actress standing in a darkened space, lit so that their face and front side are easily visible but leaving the background dark while also stylishly lighting them from behind, creating a sparkling outline against the inky blackness. These are brief moments of appeal in a feature that slogs through its run time.

Besides the aforementioned positives, nothing in “Shoot the Moon Right Between the Eyes” cohesively comes together. Running only a scant 75 minutes (according to the festival schedule), it’s a movie that is more of a punishing chore to sit through than anything.
(Review by Bret Oswald)

Email ThisBlogThis!Share to TwitterShare to FacebookShare to Pinterest
Labels: Bret Oswald, DallasIFF2019, Shoot The Moon Right Between the Eyes