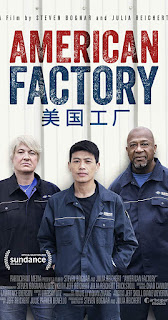 AMERICAN FACTORY
***½ (out of ****)
In 2008, General Motors shuttered its Dayton plant, leaving the residents of the Ohioan city in a scramble to find some foothold for itself. The year is not a coincidence, by the way: This was, indeed, on the tail end of the worst of the economic recession following the devastating housing bubble of 2007. We hear stories of what happened to some of the plant’s employees in the wake of its closing, and they are tragically predictable: One woman lost her home when she lost her job, forced to live in a single-room set-up in her sister’s basement. That, of course, is just one story. We do hear others, and the connecting point is the same: For a town like Dayton, the GM plant was a lifeline.

This is only the prologue of American Factory, a documentary equally as inquisitive as it is heartbreaking, which chronicles an attempt to put Dayton and its residents back on their feet. Potential salvation comes, not from an American company, but Fuyao, a Chinese glass manufacturing company. Its chairman, Cao Dewang, has decided to invest in American business. To that end, he has formed Fuyao Glass America, a Stateside division that will manufacture the glass found in windows and rearview mirrors of cars. It is a can’t-miss proposition, and by setting the business within the husk of the old GM plant, Cao has aimed directly at the heart of this town in dire economic straits.

What follows is a fascinating exploration of a series of dichotomies and contradictions within these opposing economic cultures. In China, workers live at their place of business, seeing their families only a handful of times per year and generally being run like work is basic training for the military. The attitude, of course, is one of productivity ahead of livelihood, and the Communistic structure is a huge part of this. In the long term, then, the result is exceptional productivity and incredible isolation. Wong, a worker in the furnace, has come to the United States and been separated from his family in the process. Once one realizes that he wouldn’t be around them much to begin with, it’s a bit of a kick in the gut.

In America, workers have more freedom. Weekends are a thing, the shifts are only eight hours (not including the paid, thirty-minute lunch break but including the two 15-minute breaks allowed on each side of lunch), and they get to see their family nearly every evening. Through the observational approach taken by directors Steven Bognar and Julia Reichert, we see that such comfort and complacency have gotten in the way of efficiency in the workplace. Glass cracks or, because of a problem with the cooling temperature, explode. Once Chinese workers come in, the disparate styles of working slow production nearly to a halt.

Some of the early segments are amusing in a genuine, then cringeworthy, way, with workers on both sides of the cultural divide acting with bemusement at the differences (In the film’s funniest moment, Cao worries about the decorative purpose of an emergency fire alarm when its placement is mandated by law). When the central conflict – of a union threatening to form, following complaints of treatment and workplace injuries, and of Cao threatening the shuttering of a business in response – arises, though, American Factory earns all the feelings it elicits.
(Review by Joel Copling)