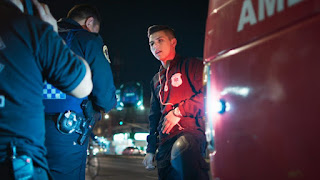 MIDNIGHT FAMILY
*** (out of ****)
In Mexico City, a metropolis of nine million people is only served by 45 functioning government ambulance. This is the startling fact that begins Midnight Family, and indeed, the text continues to startle. In the wake of such an institutional or economic failure to serve the people, privately operated ambulance services spring up out of nowhere. Luke Lorentzen’s film follows the activities of one family that operates such a service, but while the calls they respond to are the central purpose of the film (providing what can only be described as “set pieces,” given the way the director captures the action), this is a movie that is more valuable for the things it has to say about this family.

A curious thing to notice from the beginning is the feeling of seeing staged moments within and involving this family. Some of this cannot be faked, such as the exhaustion felt by Fernando, the current patriarch of the Ochoa family, who takes medicine for and constantly checks his heart rate. This job is a source of enormous stress for the man, who must worry equally about the success of his business and the well-being of his family. The survival rate of his patients is certainly a concern, but of equal or greater concern for Fernando is the ability to pay for the equipment that is the vessel for that medical care.

The operation seems to have been manhandled by Fernando’s son Juan, a 16-year-old paramedic, wise beyond his years but also a bit conniving. As an example of this, take his treatment of an 18-year-old patient who has been viciously headbutted by a boyfriend: As willing as he is to call her mother, he also keeps in mind the necessity to send them to a private hospital. We do not come to understand the depths of this decision until the late in the film, when the full portrait of the capitalistic model of this ambulance is painted. It comes into full view with a remarkable sense of honesty and compassion. It also reveals a darker heart to these subjects. Josué, the youngest child, is an exception, but nearly everyone else here seems to be playing to the room.

Conversations, both on the phone and between people face-to-face, have an oddly staged feeling. The feeling is a wrong one: These are genuine people, but they also are trying to represent their business to a cameraman. The calls are genuinely terrifying, particularly the way Lorentzen (who was cinematographer and editor) sets the camera on the dashboard of the ambulance, amplifying the tension. The filmmaker could have gone a bit deeper into this aspect of the film, particularly its toll on this family (It also immediately lends itself to being serialized in television form). But Midnight Family is a curious and quite effective examination of economic straits.
(Review by Joel Copling)