DallasIFF2019 - Before You Know It 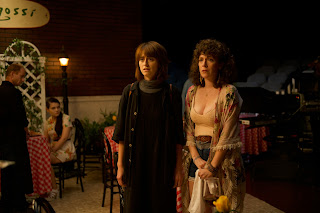 Actress turned writer / director Hannah Pearl Utt opens her film, “Before You Know It,” with a long tracking shot following two women, Rachel (Utt) and Celia (Ayden Mayeri), as they walk down the street. Their conversation gives no indication of their relationship. It has a nice flow and seems like the two are comfortable with each other. That is until we find out that Rachel and Celia are on a date and that Rachel lives in an apartment with her father Mel (Mandy Patinkin), sister Jackie (Jen Tullock), and Jackie’s pre-teen daughter Dodge (Oona Yaffe) above a run-down theater. Celia seems uncomfortable with this fact and isn’t heard from again.

This opening scene highlights one of the strengths of Utt’s writing. Her characters are diverse but she doesn’t feel it necessary to shove the fact down the audience’s throat – a welcome change from movies where characters’ defining characteristics derive from what makes them different. In “Before You Know It,” Rachel is a woman who just happens to be a lesbian, a fact that doesn’t become her defining characteristic and isn’t mentioned again for most of the film.

Mel is a playwright, who is working on finishing his latest play – set to co-star actress daughter Jackie with Rachel working as stage manager. Mel has been chosen by a fellowship to receive an award in a ceremony he attends with his daughters. The ceremony does not go well. Mel rejects reading the speech he has written in favor of taunting the audience and the fellowship in an un-jovially childish act. Rachel and Jackie don’t have long to feel appalled by their father’s showmanship. Upon returning home that night, Mel, who has had too much to drink, slumps to his death on Jackie’s shoulder.

Through the reading of their father’s will, the sisters find that their once thought to be deceased mother is alive and well. She’s an actress on a popular daytime soap – and now the sole owner of the theater and apartment in which the sisters live.

Prior to their father’s death, an accountant – Charles (Mike Colter) – was hired to help the family sort out the theater’s finances. Charles finds that Mel has left his daughters with massive debt, causing Rachel to worry that once their mother learns this news she’ll sell the building, leaving her daughters and granddaughter homeless. Rachel also learns that Sherrell’s signature is required on a form in order for the women to continue holding performances in the venue, leaving her conflicted on their next course of action. Jackie becomes convinced that the best idea is to meet the woman, Sherrell (Judith Light), while Rachel remains reluctant.
(Review by Bret Oswald)

Posted by Dallas Movie Screenings at 11:47 AM

Email ThisBlogThis!Share to TwitterShare to FacebookShare to Pinterest
Labels: Before You Know It review, Bret Oswald, DallasIFF2019