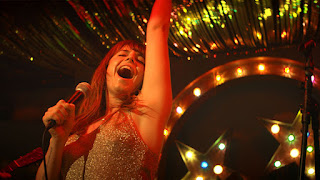 This has to be the "feel good" film of this year's Dallas International Film Festival. Jessie Buckley who plays Rose-Lynn Harlan is an Irish singer and actress. She came in 2nd place in the British TV competition I'll Do Anything. Her outstanding voice and plucky performance is truly a revelation despite the limitations of the movie's story.

We meet Rose-Lynn as she is being released after a year in prison. Part of her probation is wearing a ankle bracelet which requires her to be in her home from 7pm - 7am. Despite her young age, she is the mother of 2 children who was being looked after by her mother Marion (Julie Walters). Handing out some tough love, she wants Rose to get a real job and not the gig she's had since 14 years old playing with the house band at the Glasgow Opry called Mississippi Tundra (featuring musical talents such as Neill MacColl, Aly Bain and Phil Cunningham). During her absence she had been replaced which triggers her short temper and frustration. Her mother suggests working as a "daily" or house cleaner for a well to do family. Sophie Okonedo plays Susannah who discovers from her kids that Rose can sing. She is impressed with her voice and encourages her in Rose's dream to go to Nashville. She has her make a recording on her computer that she sends through her connections to a BBC country music DJ (Bob Harris in a cameo role). He's impressed by her and encourages her to write her own songs and play an instrument.

Single minded Rose asks Susannah for $5000 for her trip, not even considering that is not the kind of thing you can ask someone. Susannah hatches a plan to invite her well heeled friends to a group funding concert to help raise the money. As usual with Rose, not everything goes as planned. Her mom is not supportive of her dreams, Susuannah"s husband think she is playing on his wife's generosity, Rose's kid's are barely communicating with her as she drops them off at various friends and relatives as she rehearses. Rose is alienating everyone losing sight of what's really important in her life.

Affectingly directed by Tom Harper and written by Nicole Taylor highlights the boisterous personality of Rose as she only becomes alive while performing with the live band and a cheering audience. Then there is the sincere vulnerability of her acapella moments that will not leave a dry eye in the house. It's a Dorothy of the Wizard of Oz kind of resolution of discovering that there is no place like home. On her arm, Rose has a tattoo that says "three chords and the truth" which is the heart and soul of country music. Not country and western. Just country. And you don't need Nashville for that.
(Review by reesa)