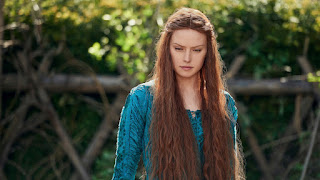 OPHELIA
*½ (out of ****)
Ophelia purports to be a “retelling” of Hamlet from the perspective of the eponymous love interest of the tragedy’s eponymous prince of Denmark. It changes so many things about the story and especially the ironic ending of William Shakespeare’s play that it can barely be called a retelling, but it also features Hamlet himself so heavily that the character essentially shares top billing with this movie’s version of Ophelia. Director Claire McCarthy’s vision of this world is surprisingly flat-footed, too. The images are all blunt colors and stagey lighting and obvious sets and costumes. It feels more like an amateur production than anything else.

It is also entirely unconvincing as a story set-up from the get-go. Briefly recounting a childhood in which Ophelia is a vagrant adopted by Queen Gertrude (Naomi Watts), the film catches up to her adulthood, in which the maiden to the queen is played by Daisy Ridley (whose solid performance easily elevates everything about this character on page). Screenwriters Semi Challas and Lisa Klein attempt to adopt a progressive view of the character as a world-weary, hardened woman, yet when this version of Hamlet (George MacKay) catches her eye, much of the film’s length is devoted to her hushed adoration of the prince. The chemistry between the two characters is predictable: He charms her, and she resists it until the inevitable moment when they must fall deeply in love.

The Bard’s own view of Ophelia remains, then, and that means that she ultimately has no agency as a character. Her happiness is entirely tied to the story of Hamlet, to which McCarthy, Challas, and Klein are tethered. The specifics of that story remain: Her father Polonius (Dominic Mafham) still objects to her romance with Hamlet and is still the victim of a tragic case of mistaken identity. The queen is still locked in romance with Claudius (Clive Owen, donning an unfortunate wig that always seems close to falling off), except there has been a new character added: a local witch with her own tragic backstory, which is tied inevitably to the queen’s.

There is more from where those changes come, and it seems that the screenwriters and McCarthy desire nothing more than a complete overhaul of Shakespeare’s text, offering closure where there was none before (a slight improvement from a certain point of view) and an alternate version of the story’s final events that favors the film’s distinctive overuse of slow-motion photography. Ophelia favors melodrama over tragedy, and that is just one of a slew of problems had by this new, manufactured version of Shakespeare’s Hamlet. One pervasive thought remains: Spare me.
(Review by Joel Copling)