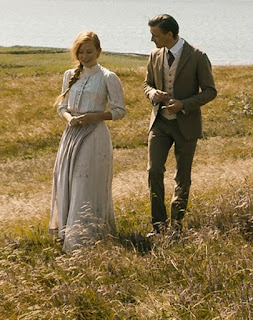 A FORTUNATE MAN
*** (out of ****)
Both a sprawling epic, tracing the fight for Denmark to become an industrialist nation through one man’s efforts, and an intimate romance, between that man from a Christian family and a woman of Jewish faith, A Fortunate Manresonates deepest as a commentary on the ideological battle between scientific progression and faith-based stubbornness. The protagonist is an idealistic man in the late 19th century with a dream and a daunting task: He wishes to introduce a series of windmills and canals to channel a new form of energy cleaner than the coal-based one currently printing money for elite members of society.

Peter Andreas (Esben Smed) has seen this plan clearly in his mind since childhood, but his progressive ideals and ideas have been smothered by an overbearing father (played by Anders Hove), who believes moving into the scientific field is an embarrassment on the family and an immediate pathway to sin. The old man is a member of clergy and a pastor at their local church. Peter Andreas, who eventually adopts the name “Per” to push away his father even further, feels no love for a God he no longer feels. To wit, he leaves the plains and boredom of Jutland for the Danish capital Copenhagen.

He has received a scholarship to a renowned school of science, though, at first, his dreams are still stifled by professors who would rather he learned from them than pursue his own ongoing project. When he is introduced to Ivan Salomon (Benjamin Kitter), a wealthy socialite who might be in a position to help with funding his project, Per must prove himself to a crotchety engineer general (played by Hans Dueholm) who finds the entire project absurd. We quickly find that Per is quite proud – indeed, too proud – of his accomplishment: He refuses the engineer general’s proposition to study under the old man.

Keeping time with this, Per’s attempts to warm up to Ivan’s family introduces him to the perennially unhappy but beautiful Jakobe (Katrine Greis-Rosenthal), oldest daughter of the uncommonly rich Salomon patriarch (played by Tommy Kenter), though Per catches the eye of his younger daughter, Nanny (Julie Christiansen), too. Jakobe is set to marry Eybert (Rasmus Bjerg), a kind but bland man with regressive views, but as with any epic romance about discreet love, she and Per are inevitably drawn to each other – despite their economically opposed upbringing, their religious differences, and the objections of his family (particularly a brother, played by Jens Albinus, who has adopted their father’s worldview).

For a while, this all works very well. August traces these relationships with a deft hand for the fragility of them, and his empathetic approach to Per’s professional and entrepreneurial goals carries a real weight. This is also an immaculate production, with windswept landscapes, lovely photography (courtesy of Dirk Bruel), and meticulous set decoration and art direction. The final half-hour is where the enterprise nearly falls apart, with an uncharacteristic shift in our protagonist and a jump forward in time that avoids really getting to the heart of that shift. Still, A Fortunate Manworks for so long that such a disappointment is a blip on the radar.
(Review by Joel Copling)