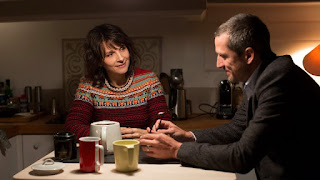 NON-FICTION
*** (out of ****)
In writer/director Olivier Assayas’ Non-Fiction, a series of infidelities meets the rapidly changing world of publishing and content-producing. These things might seem like they don’t immediately go together, but Assayas’ goal seems to be to make the point that, as much as things change, they also stay the same. Couples in unhappy pairings will still cheat on each other, and purist publishers and writers will always think of print as the only option for producing content these days. The film is a bit more interesting in its examination of the latter, particularly how the attitude surrounding the digital publishing movement progresses while print disappears, than in tracing the points of the affairs and relationships.

It is, sometimes, easy to forget who is married to and cheating with whom, especially as the number of characters central to the film’s focus are four people variously interloping with or at the expense of each other. There is no protagonist in Assayas’ screenplay, though the main points of focus seem to be Alain (Guillaume Canet) and his wife Selena (Juliette Binoche). He is a publisher at one of the foremost such companies in Europe, and she is an actress currently bored with her role as a cop (technically, a “crisis management expert”) on a popular television crime drama.

Each one is cheating on the other, and only she seems to be aware of her partner’s infidelity, uncertain how to go about ending the relationship. Her affair is with Léonard (Vincent Macaigne), an author of semi-autobiographical fiction whose latest work is one that Alain has refused to publish. The problem seems to be his incessant need to work out some real-life tension in his writing. He never uses real names of people but clues to help those in the know identify the real-life counterpart. In this case, it involves a sexual favor during the seventh part of a major blockbuster franchise, which he attributes to the notoriously beautiful host of a morning show.

Léonard’s own wife Valérie (Nora Hamzawi), a lawyer working long days on a negotiation to settle a labor dispute, isn’t a stupid woman, by the way. She is well-aware of her husband’s indiscretion, but she loves him anyway. Alain, meanwhile, is cheating with Laure (Christa Théret), the much younger digital translator at Alain’s company, who has some radical ideas about the likely future of reading in the world (hint: not books in print) and some ideas about how to implement those changes. One character argues that authors can produce more content through blogs, and indeed, the blogosphere reacts with increasing shock toward revelations found in Vincent’s book when he finally is able to publish it.

There isn’t much in the way of a plot here, obviously. Still, this is light, comic fare with a sharp view of the way the world works now at the crossroads of publishing, writing, politics, and art. The performances all work quite well together, though Canet (dryly funny as the world he knows changes so quickly that eBooks go out of fashion just as he’s caught up to their popularity) and Binoche (who gets a great meta joke out of her own existence within this approximation of the real world) get the best out of this material. Non-Fiction is smart, funny, and quite charming.
(Review by Joel Copling)