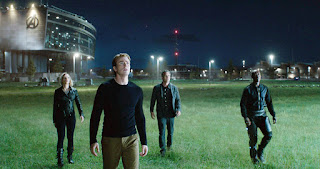 Avengers: Endgame ends with a final bang!
At last, after 10 years of Marvel’s unforgettable adventures, Avengers: Endgame marks the closing chapter of the book. Endgame is Marvelous Wrap to conclude the MCU’s Phase Three (though, there is a speculation that Spider-Man: Far From Home serves as the last). The Russo brothers, the directors, provide a continuation that picks up where Infinity War left off. To avoid any troubles, I can’t give out any spoilers away as Marvel Studios and Disney forbid the fans, critics, and moviegoers to post or mention any spoilers to people, especially on social media as the moments will be ruin as this is a no-peeking challenge sort of thing.

Just to let the viewers know, the film is three hours long, so I highly recommend you make a trip to the bathroom before the film starts as well as not eating or drinking for the entire time while watching Endgame. It’s a warning (and a pro-tip) if you don’t want to miss the good stuff for you own amusement.

First off, it’s incredible to see Ant-Man, Doctor Strange, Black Panther, Spider-Man and all the others popping up on one ginormous crossover where they teamed up with the Avengers and Guardians of the Galaxy. Really puts all the hardworking effort and equal time frame on the characters for the film’s structure from going back to the start all the way to the end, but despite this film being the end of Phase Three, I’m looking forward to look ahead at Phase Four of the MCU with Spider-Man: Far From Home and other solo/new sequels coming up.

Five years after the events of Infinity War, the remaining superheroes and half of all life are the only ones left in the universe and tried desperately (at best) to move on with their lives. They, along with Stark and Nebula, must team up for one last fight, reverse the irreversible using the time-heist methods to travel back in time, and restore life on Earth.

The Russo brothers and the ensemble cast from MCU and the films before Endgame had made their return to the big screen for one final chapter of the Avengers. They both splatter the sense of humor into the multiple narratives, but the whole fabric really stands out steadily just as the tone and the CGI really sparkles through for both Infinity War and Endgame.

While I admired the performances from Robert Downey Jr., Chris Evans, Scarlett Johansson, and all the others, what I found very touching is family-and-friendly relationship that never dies down on a number of levels, starting from one of the heroes’ family to a repairing friendship between a trust-building Iron Man and idea-making Captain America (just like you saw on the movie trailer and TV spots). Interestingly, the supporting actors from MCU appear as handy-dandy helpers to guide through the protagonists over the course of the film.

I really enjoyed how the pop culture on time-traveling films, including Back to The Future, is being used for the characters’ dynamics (as well as adding comedy more likely) to the film. Really gives me a warm-fuzzy feel that a person is missing his/her wonderful childhood back in the day as well as simply going back to watch the older MCU films from before. I also believe that the music score from Alan Sivestri, the CGI, and the visual effects become a strong finish for the characters and villains to appear equally. It really adds up to the conclusion of how the superheroes assemble in one big happy family/team to defeat Thanos (portrayed by Josh Brolin). Not to mention the funny dialogue and humorous amounts of die-hard action sequences that tickles the audiences on the edge of their seats.

Out of everything else I see, Avengers Endgame is great film with emotional plot twist. I will put this as one of the best Marvel films I ever watched. However, I cannot say anything more when it involves watching a superhero film with exciting things that will blow your mind. You’ll have to see it for yourself if you want to find out more. Since this is an anticipating film, I will guess that Endgame has a higher chance of being the king of the box office worldwide [-ly], but we’ll see how Endgame turn out to be. With that being said, Endgame manages to tie the entire MCU up with a beautiful, emotional, hopeful conclusion.

For one last tribute, this is Stan Lee's final cameo in a Marvel Cinematic Universe movie