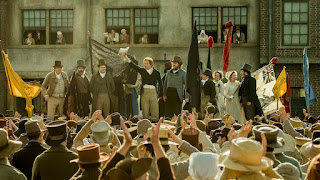 Mike Leigh's new feature tackles the tragedy in 1819 when a crowd of some 60,000 people from Manchester and surrounding towns gathered in St Peter’s Fields to demand Parliamentary reform and an extension of voting rights. The release of the film marks the 200th anniversary of what has become known as the Peterloo Massacre. The peaceful gathering to listen to an activist speaker turned deadly when the militia charged the crowd in an attempt to arrest the organizers.

The story begins with a young soldier, Joseph, who has returned from the Battle of Waterloo suffering from PTSD and still wearing his uniform. He comes from a poor family in Manchester. His parents Joshua and Nellie. Joshua, son Robert, daughter Mary, and daughter-in-law Esther live together and toil in the local cotton mill seven days of the week. In the depressed economy the traumatized Joseph cannot find work. The men attend meetings where local agitators discuss radical campaigns for equal civil and political rights. The magistrates sends spies to these meeting to gather evidence to arrest the leaders and speakers. Obviously everyone having equal rights will put a crimp in the status quo. Some of the magistrates are of the notion that there should be a separation of have's and have not's.

It's a very wordy script and with the heavy accents it's sometimes difficult to understand some of the dialogue. The story doesn't focus on a major protagonist but gives insight on divergent groups. From Joseph's family on how his mother bakes hand pies and sells them for a penny each at the local market, to magistrates giving outrageous prison sentences to the poor for small infractions. There are the local merchants discussing the needed reforms, they gather at the local newspaper that is printing and supporting the reforms. There are scenes with the dandy Prince Regent who is more concerned with his personal comforts than the concerns of his subjects. He's easily manipulated to see the coming gathering to hear the famous radical Henry 'Orator' Hunt speak. There is also some conflict with some of the organizers who are put off with Hunt's demand that he would be the only one to speak. Attendants are encouraged not to bring any weapons less the powers that be see it as a hostile intent. Ultimately it doesn't matter to those pulling the strings.

The film is clocks at 2 hours and 34 mins. The small details of their lives, the costumes, the set decorations, is very immersive. It maybe more difficult to follow the characters, but the issues of what these people are experiencing are very universal and can be related to what we are going through today. The incident was christened Peterloo by the reporters covering the event. Shocked and shaken, 15 people were killed and 700 wounded when the mounted cavalry charged the crowd wielding sabers. The massacre played a significant role in the passage through Parliament of the Great Reform Act 13 years later.
(Review by reesa)