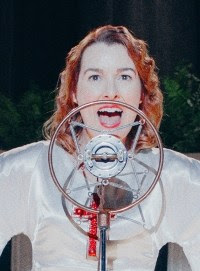 SISTER AIMEE
*** (out of ****)
Sister Aimee weaves a complex, stranger-than-fiction tale, set against the dusty backdrops of California and Mexico in 1926, that, according to a title card, is about 95% fiction. The set-up here is based in truth: A famous evangelist once faked her death to escape the spotlight, then resurfaced after some time and a lot of tabloid-level rumors of infidelity and fraud. By all accounts, Sister Aimee Semple McPherson was a fraud, out to do this for money, and an entertainer, incorporating something of a concert/showboating element to her miraculous “healings” and sermons.

In their approach, writers/directors Samantha Buck and Marie Schlingman blend an ambitious mixture of nihilism and comedy. This is a self-contained world in the same way the worlds of the Coen brothers’ films are, and that also means it’s a pretty bleak one. Because of that, perhaps the screenplay relegates Sister Aimee (Anna Margaret Hollyman), at least for a while, to the role of passive protagonist. We don’t know much about the woman’s background, which is imparted mostly through quick flashbacks to a reverent crowd and a mother (played by Julie White) entranced by the income of her daughter’s services.

Aimee, though, despises the spotlight, drowning herself in promiscuity in response to it, and meets Kenny (Michael Mosley), a stranger who has a plan that whisks them both off to Mexico. All Aimee needs to do is fake her death and establish a new identity. They will be the Ormistons – Steven and Dot – and in order to make their way through Mexico, they hire a mysterious guide named Rey (Andrea Suarez Paz), whose mysterious past keeps time with a local legend. What follows is a twisted tale of murder, revenge, and imprisonment that the directors cut through with the relatively light comic touch.

It takes a little while to get into that rhythm and atmosphere, with the early parts of the film awkwardly introducing a lot of information through flashbacks as clunky narrative devices. The cinematography, provided by Carlos Valdes-Lora, is appropriate to the dusty-chestnut feel of a Western, except this one consistently subverts the tropes commonly connected to any film in the genre. A point is made to switch the gender roles of Aimee and Kenny, at least with regard to their place in the car being driven: Aimee eventually takes the wheel, after having been in the backseat for a time, and Kenny makes the same movement in the opposite direction.

The most intriguing character, though, is Rey, whose tragic past catches up to the present in unpredictable ways, and Suarez Paz is quite good at keeping much of the character’s emotion potential rather than active. She grounds the film and keeps its quirk energy from taking over entirely. The film almost crumples under the weight of its own strangeness, especially with a last-minute musical number that rather sticks out when it should bring the house down. Sister Aimee works, though, because it’s an odd duck. That alone should be enough to give it some credit.
(Review by Joel Copling)

Posted by Dallas Movie Screenings at 10:51 AM