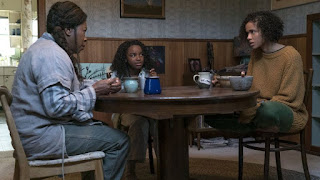 In the near future-ish, the world is under an extreme drought. Water is a precious commodity. The landscape is dry, most businesses and buildings have long been abandoned. It's as if everyone has hunkered down somewhere unseen. We meet Ruth (Gugu Mbatha-Raw) who may be running away from something. She seems to have a strange ability to cause earthquakes. A man speaks to her in a cafe. He says he knows what she can do and wants to help. He's a scientist and had been looking for her for a long time.

So begins this quiet, intriguing woman-centric, part sci-fi, part family drama directed by Julia Hart who wrote the script with Jordan Horowitz. It's a tight quiet film that doesn't waste time on explaining everything and lets the viewer immerse them selves into the lives of Ruth, her mother Bo (Lorraine Toussaint) and Ruth's daughter Lila (Saniyya Sidney). Ruth's power was different from her mother so she ran away. Got into drugs and alcohol finding herself pregnant. Knowing that her "episodes" was not safe she left Lila in her mother's care. They live in an isolated farmhouse. Nina Simone's "New World Coming" is playing on a turntable while Bo is smoking a cigarette on the porch. Suddenly she manipulates the smoke in a colorful array before it falls to the ground. This is the first inkling that maybe Ruth's seizures are not singular. Her daughter Lila is a gifted mechanic, is able to make her cup disintegrate and come back together. The colorful effects she is able to experience afterwards is what makes her smile, blissful in the beauty that only she can see. Ruth was never able to see those colors. Nor could she use her powers like her mother and her daughter.

While Ruth is trying to resolve her relationship with her family, the guy from the cafe Bill (Christopher Denham) tries to get the government agents to not take Ruth by force. After all they don't understand what she can do to them. The police chief Ellis (David Strathairn) who has a personal connection to the women warns Bo that they are on to them. The male characters in this are very secondary to the female leads. They use their force and single minded authority to threaten and bully. The issues of climate, female empowerment, and creativity are all woven in to the story. Ruth discovers a book that was written by several generations of women of their family. All having the same kind of powers. Ruth realizes that she is gifted by something that is extraordinary.

This may seem slow at first, but you really feel for the characters involved. As Bo tells Ruth, "This is only the beginning". The ending really begs for a continuation of what they can accomplish in the future.
(Review by reesa)