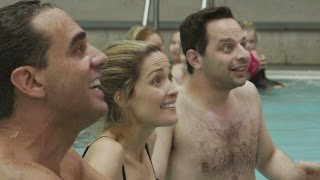 Adult Beginners: fireworks; sparkler; or misfire? My rating is unequivocally a misfire.

What an overall disappointment! This film reminds me how hard it is to make a truly outstanding movie. It is an incredible feat for any filmmaker just to make it to the finish line and get a film released. Which is why is it always heartbreaking when you see a film fizzle and die on screen after all the blood, sweat, tears, and sleepless nights you know went in to making it. Where did it all go wrong? How could they blow it?

I had high hopes going in for this film to be a hit with all the amazing talent involved. The entire movie team's pedigree is top notch. The independent film world darlings, the wonder brother team, Mark and Jay Duplass are Executive Producers on the project. Director and Producer Ross Katz (Lost in Translation, In the Bedroom, The Laramie Project) assembled a stellar group of actors expertly cast in their roles: Rosy Byrne (Bridesmaids, Neighbors, Adam); Nick Kroll (Kroll Show, The League); and Bobby Cannavale (Blue Jasmine, Chef, Shall We Dance).
The cast had great chemistry together but the biggest problem is with the script written by Liz Flahive (Nurse Jackie) and Jeff Cox (Blades of Glory). Rosy Byrne (Justine) and Bobby Cannavale (Danny) play the typical bored suburban married couple with a 3 year old son facing the stressful life challenges of a new baby on the way. Nick Kroll (Jake) plays Byrne's estranged brother who's start-up company in the city goes bust and he is forced to become his nephew's manny. Adult Beginners, sadly, does not cover any new ground. The movie felt like it was in a perpetual state of almost going somewhere. There are some laughs but at nothing super original or memorable.

Every film needs a solid foundation to build upon and that foundation should be an engaging, creative script. If it is not good on paper, there is no hope for it on screen. If we can generalize and say that Hollywood is all about the giant, super hero blockbuster films. The independent studios can be generalized to be all about the rambling, wordy films that dribble on and on and really do not go anywhere. Some films might occasionally work as atmospheric art but mostly they are just very tiring for their audience to endure . Filmmakers should want to teach and entertain their audiences, not drain the life out of them.

It comes down to the fact that not every film is a wild success. As in other aspects of life, the best we can do is celebrate the good and learn from the bad. I hope the gifted Adult Beginner team has the opportunity to learn from this film and the chance to make another project together. They are all better than this movie shows them to be and they deserve a chance to get it right and succeed.
(Review by Erin Nicole Parisi)