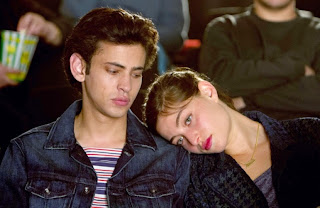 There is still a fight between the Arabs and the Jews today in the Middle East. In “A Borrowed Identity” a young man’s life visits us and throughout the film he faces a lot of predicaments. Eyad is a smart young boy who gets accepted later in life to a university in the Jewish part of the land. His father is a fruit picker as a result of his political views. Eyad meets a beautiful girl with whom he has a strong relationship with. He also volunteers for a disabled boy who is his age and his mother. The film really highlighted dedication to another human being. Eyad and his girlfriend sacrifice for each other in order to see each other. Eyad spends so much time with the disabled boy that he becomes a family member to the boy’s mother. This is a pretty deepened emotional drama that created a sadness in me. Early on in the film Eyad’s father gets arrested for protesting. The family’s worried and angry looks when they hear about it remind us that there is still this Jewish/Arab clear issue. When the father explains to Eyad that he was called a terrorist for something he didn’t do and that he was never brought to court, Eyad realizes the meaning of being in Israel. You can see Eyad’s hesitancy in entering the school. The factor of entering an unknown world is prevalent. He is also made fun of when he has to read the Bible for class even though that is not his religion. To know how pitted people are against each other there, makes that scene difficult to watch. Eyad also has people insult his religion explicitly which he just takes in a quiet manner. People’s backgrounds of hate towards each other become apparent in different circumstances in the film. The main character’s calm and mild tone is consistently there throughout the film which made me believe that he knew how to accept. Eyad’s transformation of a young shy boy to a grounded friendly person is a great transition in “A Borrowed Identity”. The actor playing Eyad has a face that is gentle and calm. The clearest idea that the piece communicated was once again this thing of Arabs as a second class citizen. Eyad, being Arab, gets stopped in the middle of the street and told to wait for confirmation of his papers. When one watches that scene there is a feeling of unjust treatment that flows through the head. Watching this taught me a two hour lesson on major conflict between individuals who have the ability to come to a stable place.
(Review by Wyatt Head)