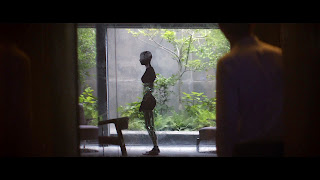 Alex Garland the screenwriter for 28 Days Later, Dredd, Sunshine, and Never Let Me Go, also wrote Ex Machina with which he makes his directorial debut. Robot stories, artificial intelligence running amok have always held a fascination on how human beings want to become a god like by creating machines that are close to human. Terminator cyborgs can't be bargained with, can't be reasoned with, doesn't feel pity or remorse. Blade Runner replicants want to be humans but they have a build in expiration date. Asimov's I Robots are programmed not to harm humans. Garland's new vision of AI adds to the collective a perspective on the inner life of an artificial being.

Domhnall Gleeson plays Caleb, a computer coder who wins a trip to his company's CEO's hidden lair for a week. He works for Bluebook, a Google like search engine that his boss Nathan (Oscar Isaac) wrote when he was 13. He is airlifted by helicopter to a vast mountainous reserve and set in a mountain valley where he has to make the rest of the way by foot through an exotic forest near glacial streams where he finds the hidden home. He is given a key card that will only allow him in certain areas of what turns out to be more of a research facility. The sleek modern architecture is beautiful, cold and somewhat lonely. Nathan seems friendly, yet expectantly extremely eccentric. He tells Caleb to sign a non-disclosure contract before telling him that the main reason he is there is to help him run a Turing Test on a humanoid artificial intelligence that he had created. In a series of “sessions” Caleb is to question the AI behind a glass partition to discover if Ava (Alicia Vikander) is capable of passing as human. The beautiful creation has a human flesh like face, hands and feet, but the body, shaped like human is encased in a see though frame where her clearly cyborg workings are showing. The facility also experience power outages that causes lock downs of the building and Nathan can not monitor Caleb's sessions with Ava.

The film is filled with discussions on the responsibility of AI and what it means to our future. Then there's the paranoid undercurrent as Caleb realizes that he didn't win a contest as much as he was personally selected by Nathan and he may the actual experiment. There's another mysterious person in the house, Kyoko who cooks and “serves”. Nathan says she doesn't speak English so he can do business without fear of leaked information. There's a scene when they dance together that is disturbing to Caleb. Meanwhile Caleb is trying to figure out how he feels about the strange erotic fantasies he is having of Ava. Nathan presses Caleb to wonder if Ava feels something in return.

Vikander does an amazing job portraying the AI. The graceful way she moves to the slight facial moments as she considers her thoughts. The special effects to make her body seem see though with her glowing wires inside is really, for lack of a better word, cool. Isaacs' sketchy Nathan is very elusive. He acts like a friend, but makes Caleb suspicious of his real agenda. The movie runs well at first, then sort of loses it during the last act. But that doesn't matter, it's still very conceptually interesting and visually pleasing. Worth the popcorn if you like Sci-Fi.
(Review by reesa)