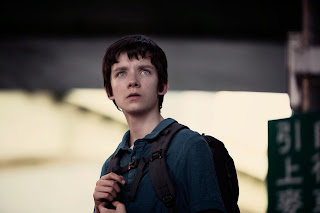 It seems like more and more films nowadays are writing about a very present issue called Autism. In “A Brilliant Young Mind” a boy who is diagnosed as being on the spectrum discovers math as a way to put his mind on something. He ends up befriending a teacher which leads to training him for the International Mathematics Olympiad. The idea of silence relating to autism was stated by this film. Nathan (the lead role) is quiet a lot of the time. He doesn’t communicate but he has a lot to say. I thought that the way the film took Nathan from mostly silent to starting to talk with friends was very clever. We were shown his growing comfort as he became more accustomed to connecting with people. Math for Nathan is a way for him to be interested in something. The relationship between his teacher of 7 years, who has MS, and him through math was one of two hurt people finding happiness in the other. There are so many different math problems that I never knew existed that were included in the film. That really allowed you to grasp the level of the students in the film who compete. The mother who is played by a face I just saw in “Paddington” is immensely tired but loves her son completely. There is such a difficult scene to watch where she is trying to explain to a waiter that her son only likes a prime number of prawn balls. She brings the food to the car, her son realizes there’s too many, and insults her. We as an audience were really made to understand the emotional stake it takes to raise a child with the Autism Spectrum. The mother is alone because she lost Nathan’s father to a car accident. Nathan seemed to be a lot more close to the father as he let him hold him. The mother is just trying to look out for her son. There are crucial moments in the film where Nathan is away training for the math competition with other kids. This is when we see Nathan start to open up especially to his Chinese girl partner. The new realm of being away from home is shown as not as chaotic as one might think. The scenery of Taiwan was incredible to see through Nathan’s eyes. The focus on stoplights and numbers through the city exposed Nathan’s brain and love of math. I was so brought to my heart to see another autistic boy from the group. His problem was talking a lot in a rude way to everybody. He ends up being made fun of and he starts cutting himself. Gosh, the scenes where that happens people have to realize that his brain doesn’t work in a normal way. He is sort of put in that personality in his mind. This film created empathy for all the characters. This is a fine piece of work from Britain and it was educational as well as enjoyable.
(Review by Wyatt Head)