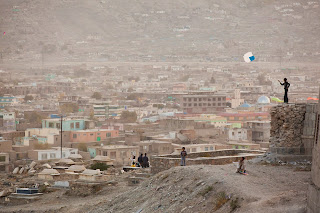 This was my favorite documentary at the Dallas International Film Festival. It was gorgeous, rich in color and haunting beyond belief. This is Frame by Frame.

When the Taliban ruled Afghanistan, they banned all forms of photography and destroyed anything on a photo. Memories wiped away just like that and you can’t get those back. In 2001, when the Taliban fell from power there was something happening, a photojournalism revolution. People were coming out with cameras to capture this ruptured reality that they live in. They wanted to capture the truth and let the world know the horrors they face as a society. The documentary focuses on a few photojournalists whose passion is to tell the truth and take photos of the events around them, their town, and their country. Directors Alexandria Bombach and Mo Scarpelli bring us this tragic story through their eyes and what they have experienced. It focused on a few gentlemen and a woman and what drew me the most was the woman. This is a person who is treated poorly because of her gender and shunned for taking photographs. It made me tear up a tad when she said in the film, “Since I am woman, this camera gives me a voice.” It still baffles my head on why women are treated so poorly over in the Middle East. I know it’s not everywhere, but it is most places. I digress. These photojournalists take these disturbing and beautiful photos throughout. We get to see these photos on screen. Some can tell a tale of sadness and loneliness, while others can express the sheer beauty that the area can offer. I won’t say anymore because I want you to experience this breathtaking film for the fight of freedom of expression.

With the beautiful photos being taken, the film is shot on the same caliber with breathtaking cinematography. It’s just a gorgeous film throughout and there is never a dull shot. Every shot was a painting. The film is about an hour and half and I didn’t feel it drag once. The pace is slow but it seeps into your skin and really irritates you. It’s a mix of both emotions of disgust and awe in beauty. It’s a beautiful nightmare that unfortunately, people from over there haven’t woken up from yet. The score also adds a level of emotional pull that was equal parts haunting and inspiring. After the movie was over, I sat there had to really let in sink in. It was that powerful. 9/10
(Review by Chase Lee)