While We Are Young 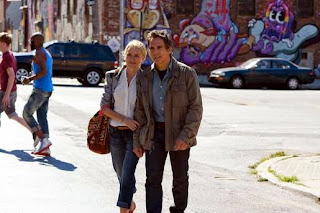 I didn’t care for Frances Ha, the previous movie directed by Noah Baumbach, but this is a funny, sharp, and a great story about getting older and how that isn’t a necessarily a bad thing. Ben Stiller and Naomi Watts play a couple in their forties and they feel like life is slipping away from them, as they don’t have children and have that empty void in their lives. They meet up with a younger couple, in their 20’s, played by Adam Driver and Amanda Seyfried. Driver and Seyfried are young and hip and always filled with energy. Stiller plays a documentarian and Driver is interested in his previous films and wants to help on his current documentary. That’s all I say about the plot because I was pleasantly surprised by all the twists and turns and I think you should experience the same thing. The directing by Baumbach was slick and really had an interesting yet simple premise. An older couple hangouts with a younger couple to feel young again is not really to promising. I think putting my expectations low and going in with a mindset that this will be an average story with no real depth really helped because it exceeded my expectations. I loved the fact that everyone had great arcs and I really cared about everyone and what was going to happen to them. That’s all because of the great directing. The acting good and I appreciated everyone’s performances. Ben Stiller gives his best in quite some time. He is funny and his character had a lot of drive to finish his documentary even though he was failing in many situations. I admired him for that. The women are great in this, but Adam does a great character shift. He is super likeable at the beginning, but towards the end he is a huge A-Hole. That’s a great actor when he can convince you like that. His character was smart and I could see where he was coming from, but he made some decisions that were probably unethical. His character was like Lou Bloom in Nightcrawler, but not a complete sociopath. The cinematography is nice to look at and adds a cool, 90’s feel to it showing the urban life of New York City. I can’t explain it. It felt like an older movie, which isn’t a bad thing. The rhythm is off-the-charts good. I was so engaged as to what was going to happen that I was glued in. The opening scene kind of really set the tone of the two leads and it just got better from there. The third act was pretty suspenseful, but I was a tad underwhelmed. Maybe I was expecting something bigger? I don’t know, but it doesn’t take away from the experience. I forgot to mention that there are elements of comedy, suspense and drama and it’s kind of a cool blend. If you liked Frances Ha, independent films or a unpredictable story and something different, you will enjoy this nice little gem. 9/10
(Review by Chase Lee)

Email ThisBlogThis!Share to TwitterShare to FacebookShare to Pinterest
Labels: Chase Lee, While We Are Young review