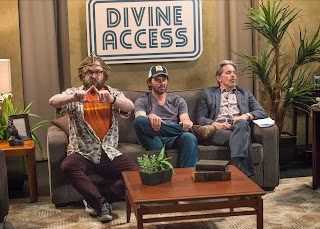 This was a funny and oddly inspiring tale with a lot of heart and makes you totally forget that Billy Burke was the dad in Twilight. If you had your doubts about him, this will definitely change your mind.

Steven Chester Prince directs a humble story with real, natural characters that we can all relate to. Jack, Billy Burke, is kind of a loser. He barely works, sleeps with a lot of women, drinks and follows his agenda and no one else. He gets approached by one of his friends, Patrick Warburton, to come on a religious talk show as a guest produced by him. When Jack comes on the show, Divine Access, he immediately is a hit with viewers and becomes an inspiration overnight. At the height of his popularity, Jack goes on tour and goes to speak at certain group gatherings. Throughout road trip we learn a lot about Jack as he is discovering what his purpose in life is. Prince really writes and directs a complex character in Jack and he is very entertaining to watch. There is a draw to his character even though he is blunt and tells it like it is. Jack gives advice to these people and giving them hope and comfort. But he sees it as just telling them like it is. It’s all about perspective on someone could take that advice and that’s a theme in this film. Another question brought up a lot is, “ Do you believe in what you saying?” All of us give advice and we think we are awesome, but do we believe in what we are saying? Maybe its giving comfort to people and making them smile so they don’t feel as miserable as you? It’s a great story and I don’t want to spoil anything for you.

The acting is fantastic all around. Billy Burke gives a great performance and he really commands your attention. He has a great character arc and, in a way, you have to respect his character. He might have been truthful and crass, but oddly enough, he was also inspiring. I think it’s the people you don’t even think about that can inspire you the most. Patrick Warburton is always funny in anything he does and Gary Cole plays an offbeat reverend that is booted off of Divine Access when Jack takes over. His character plays an important part at the end and also raises the question, “Is religion worth hurting another human being over?” It raises some interesting topics on religion and how it could be poisonous to a certain group of people.

The cinematography is good and there is nothing to complain about, but this is a story, character and acting centric film and the shots just are a nice add-on to this movie. The film is about an hour and forty-five minutes and I was engaged throughout the entire thing. There were no dead spots in my opinion as the story had a good flow and definitely makes you feel good at the end of it.

Overall, this is a funny, charming, great film with sharp writing and great, realistic characters that we can kind of see in ourselves at some point in our lives. 8/10
(Review by Chase Lee)