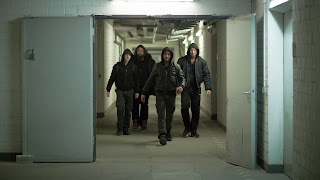 If you are looking for a pretty slick, engaging, fast paced cyber thriller, then this film from Germany is for you. I was highly entertained and it felt like I was injected with adrenaline from the moment it started.

I have to say this off the bat, and that this film is a version of Fight Club. The tone, atmosphere and the cyber hacking reminded me of it. That’s not say this film does bring its own flavor because it does. I would say this film is tad faster paced, but, yes, there is very similar attributes. Without spoiling anything, the film starts out on a kid who is an outcast and eventually becomes friends with a hacking group. They band together and create their group name called C.L.A.Y. They are apart of a culture of other cyber hackers online and they compete to be the best hacker and outdo M.R.X., the head hacker. This is all I will say because it’s a very fun time not knowing what to expect and take this crazy ride into the unknown. Director Baran bo Odar injects his own touch with a cool, slick style, great action, dark, gritty cinematography with great characters. The one thing I really liked was the way cyber space was portrayed. It was in a dark subway with a bunch of hackers in masks talking to each other and it added another layer of grit, creepiness and those scenes were favorite part of the film. There is a twist at the end and I did appreciate it. It didn’t feel forced and really played well with the themes of identity online. When people are online they can be who ever they want and be as many people as you want, creating a new identity since you aren’t satisfied with your own. It’s a good way to escape reality and into fantasy. There is also a lot of deception in this film so it makes you wonder if, as an audience member, you are being played, too. It makes the film more engaging.

All the actors did a good job, but I really liked the main character Benjamin played by Tom Schilling. He played the type of character to where he was unpredictable and that made him captivating to watch. The cinematography was shot in a dark, ominous tone that really complimented the story. The rhythm of this thing really kept a steady heartbeat to the fluidity of it and I enjoyed every pulse-pounding scene.

Overall, this is a fun, good time at the movies. Straight up. It was entertaining from start to finish. 7/10
(Review by Chase Lee)

Email ThisBlogThis!Share to TwitterShare to FacebookShare to Pinterest
Labels: Chase Lee, DIFF2015, Who Am I: No System is Safe review