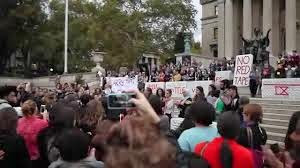 This left me with a pit in my stomach and I was disgusted at what I saw. The documentary itself is great, but its subject matter makes you feel like a crappy human being. This documentary follows the problem of young women and men that have been sexually assaulted and raped within college campuses and the lack of urgency to fix this issue and control it better. Let me vent for a second, I absolutely hate people that commit sexual assault or rape and they should be sent to prison and I hope they get raped and rot in jail. It’s a despicable thing to do as a human being and you are piece of sh*t. With that said, it really left me ill after watching it which was the director’s main intention. He gets a rise out of you with a call-to-action at the end of the film so you can support this cause. Documentaries are hard to review because I can’t view it on acting or cinematography, as they are the same in almost every documentary. I can do directing and editing though, so let’s do this. Kirby Dick, director of This Film is Not Yet Rated and The Invisible War, shows us one side of the argument and paints this movie in favor of the victims and, for me personally, it was compelling and I am glad someone is speaking up on this. Even though their arguments would be invalid (for the most part until proven guilty), I would have liked to have seen more interviews from the university presidents and the people that committed the rape. The presidents denied the interviews, according to the film, and they showed one person who committed a rape but his face was blurred. It’s amazing how you can feel high and mighty when you do it, but when you want to talk about it in interviews you want your identity protected. You should feel scrutiny for the rest of your life. I would have liked to seen more interviews from the people at blame, but I understand why Kirby couldn’t get them. He makes up for it with graphs and graphics having disturbing information on this subject. The director follows two specific women in the beginning and they explain their story of how they were assaulted and towards the end they start an organization for survivors to talk to each other and they eventually bring it to the media to help spread awareness. So it does have a more positive ending than the beginning and the call-to-action was smart to put in. What I liked about it the most, in terms of intrigue, were the cover-ups universities had so they simply could have money donations for the schools. It is an eye-opener and really makes your jaw drop. The film is about an hour and half and I thought it was a perfect length and any longer I would have been looking at my watch. Listen, I understand this is an important issue, but when it’s the same thing hitting you the head for an hour half it starts to feel weighed down and it can seem like its never-ending. That’s my only gripe on that. Kirby Dick constructs another powerful documentary and he is becoming one of my favorite documentarians. It’s a good film, but it hits you and stays with you. 7/10
It opens up at The Magnolia this Friday, April 3rd.
(Review by Chase Lee)