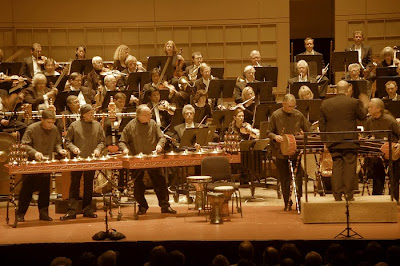 Let the beats begin. “Dare to Drum” is a documentary that blows world music from Texas’ mouth. It follows a gang of five friends who are major percussionists and a composer who comes from the famous band Police. We are taken into the comradery of hands beating on a drum while making a brand new concert destined for the Dallas Symphony at the Meyerson. Tons of different instruments from all over the world are found in this studio in the country land of Texas. Creativity is being expanded everyday with the help of the whole team. Stuart Copeland, the guy from the Police, is coming in with a flood of melodies that just seem to swim to the papers he’s writing on. The ability to maintain a funny calm attitude while making something of such a massive duty was just amazing to me. Copeland’s love of what he’s doing in that studio comes through his moving of his whole body to the music. This task of writing a percussion performance which is in conjunction with an orchestra is definitely not an easy thing to do. Yet, we are taken through this project as if each time the guys meet it is a chance for them to play around. They’re doing a productive playing around which produced some laughable moments in the film. Everybody in that team was using their own expertise to make the piece as concrete and great sounding as possible. Each person has the sound that they’ve practiced for years and they crank it up 110 percent for this once in a lifetime opportunity. There was a natural high concept that one of the drummers claimed drummers get from doing what they do. The sounds coming off the speakers in the theater make a person know why people love beats. There really is a “natural high” produced from this Texas based fun house. The camera went around the world going into the factories in Bali which make some beautiful instruments. One of the men in one scene instructs a maker of instruments to the perfect tone he wants. The man has an ear that seems to pick up on the nuances of sound and tone that can only be picked up by an expert drummer. During the last third of the film the band goes to the Meyerson to rehearse with a very intimidating maestro. They then, due to the ice storm of 2011, almost have their two and a half years of work wasted. It’s like a sports movie with everybody watching this film hoping immensely that the band gets to play. I have to say I felt the beat in this pic and I found why it was there.
(Review by Wyatt Head)