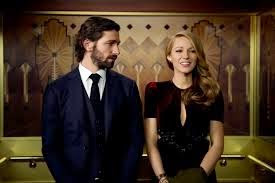 The romantic fantasy film tries to add a little science to the mix explaining how the 27 year old Adaline Bowman ends up staying young for several decades. The film directed by Lee Toland Krieger and written by J. Mills Goodloe and Salvador Paskowitz wants us to believe she has managed to survive all these years like the Highlander. It's a good thing that the star, Blake Lively is very beautiful because she is in practically every scene in the movie.

Adaline (Lively) was born in 1908. A car accident involving snow, hypothermia and a well placed bolt of lighting causes the revitalized Ms. Bowman from further ageing. The narrator explains all the pseudo science gobbley gook to justify her immortal status. Adaline manages to continuing living a normal life, getting married, having a child until one day she can't explain why she looks so good in her 40's. Soon the FBI is carting her off so that some nefarious researchers can study her. She manages to escape, thus beginning her never ending change of identities, jobs, and locations.

We meet Adaline in San Francisco where she is going by the name of Jennifer. She works at the SF Archival library, lives in Chinatown and has a dog named Reese. It's time once again, she changes every 10 years, getting fake licenses, passports and birth certificate. She adds her new name to her bank account too. At a fancy New Year's Eve party she cute meets the handsome Ellis Jones (Michiel Huisman). He saw her earlier and has been dying to meet her, managing to bring her flowers in the form of books with flower names. So clever, so it gets her interest. But Adaline knows the danger of falling in love and having to break someone's heart when she has to leave again. She keeps herself distant to his overtures.

Adaline's daughter Flemming (Ellen Burstyn) is now old enough to be her mom's grandmother. She encourages her mother to take a chance at love and stop leading such a lonely life when Adaline says she's tired of running. So Ellis gets a chance with Jennifer to become two beautiful people in a schmaltzy romance. Ellis asks Jennifer/Adaline to visit his parents who are having their 40th wedding anniversary. When she meets the dad William Jones (Harrison Ford) he is gob-smacked to see the love of his life from the 1960's in front of his eyes. Adaline covers by saying she's her mother who passed away 6 years ago. Suddenly there's really awkward moments, and Adaline wants to take off.

Without giving anything away, it all rights itself in the end, and the journey there is fun to discover. The film is nicely photographed like a post card from San Francisco. Lively plays Adaline with old school poise and charm and her wardrobe is to die for. Huisman is just the right amount of eye candy. Kathy Baker is great as Ellis's mom who is feeling a little jealous of hearing her husband waxing poetic on his lost romance with Adaline. When the truth comes out, one wonders if dating your dad's ex-girlfriend is even considered.
(Review by reesa)

Email ThisBlogThis!Share to TwitterShare to FacebookShare to Pinterest
Labels: Age of Adaline Review