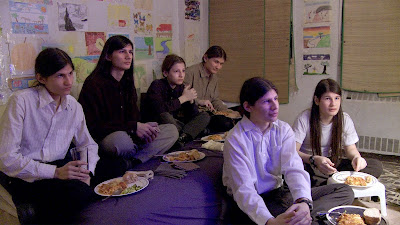 Would if you couldn’t go outside and all you could do was watch movies all day? Actually, I wouldn’t mind that. But, what if you had no friends either, no contact to the outside world? That is the subject in this depressing, but intriguing documentary about six brothers, one wolfpack.

We open up with a scene being re-enacted from Reservoir Dogs and you think that this is cool. There are some guys passionate about movies and just want to have fun with their favorite scenes, I remember doing that. But then the joy is trampled when we realize that these kids have been sheltered their whole life and movies is all they know of the outside world. Director Crystal Moselle shows us the ramifications of six young boys who have been told to stay inside because the world is awful with awful people. Right off the bat I have to say there isn’t much to say about this particular documentary. The whole film shows us the daily life of these boys and them eventually going outside by themselves. There isn’t much plot to it, but what I can tell you the central theme of this movie is fear. Every scene the kids or the parents express fear of the unknown, the outside world. Everyone is scared of something and what you have to do is overcome it. And at the end we see the boys slowly start to do things by themselves outside (get an apartment, get a job, meet girls). They eventually overcome the fear one step at a time and recover their lives before it’s too late. The reason that they stayed sane through all those years was because of movies and their mother. Movies provided an escape from their crappy reality and I can relate to that. I use movies for entertainment, to provoke my brain to thinking and escape crappy situations in my life. The one part that got me was when they finally saw a movie in a theater by themselves. They were so happy when they got out that I got a tear in my eye. Everyone should experience a film in a theater because it’s a first experience that always brings a smile to a face.

There is a lot of regret from the father who made the decision to shelter them. He was the type of guy who said, “ Screw the system, I am not working for the man.” His actions and selfishness lead to this, but I am glad the boys could band together to get out of this situation one step at a time. For a documentary it’s shot really well, especially for being in a small apartment to film everything. The runtime is an hour and twenty-six minutes and I did get a tad bored in the middle as it felt like it came to a standstill in progressing the story.

Overall, it’s a depressing look at a group of sheltered kids, but also puts a smile on your face to see them happy and moving on to create a new life. 8/10
(Review by Chase Lee)