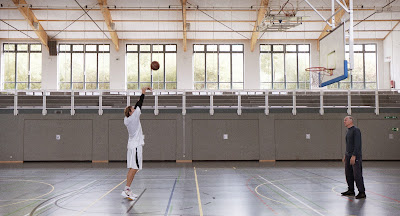 As I am standing in line for this film, Dirk Nowitzki walks passed me and he has about six inches on top on me. I felt short and I am 6’4”. Now I know how the hobbits feel when Gandalf comes to comfort their little hearts in their Keebler Elf house.

Director Sebastian Dehnhardt shows the life of pro-basketball player, Dirk Nowitzki and how he started young in career up until now. There is really nothing more to say. If you like basketball sports or have a general interest in Dirk, then you will love this documentary. If you hate all of those things then you will hate this movie, because that’s all it lays out. I have lived in Texas my whole life and Dallas for about six years and Dirk’s story did interest me because he has been with the Dallas Mavericks for a very long time and follow them every now and then. It starts out with young Dirk playing middle school basketball and a young, spry man named Holgar Geschwindner recruits him to train him to be the ultimate basketball player. What you will notice right away is that the film focuses on Holgar and Dirk a lot. They train together constantly and are practically father and son. Holgar uses physics and geometry to perfect a shot with Dirk’s body structure. Think of it like a master and his apprentice, or like I did, Rocky Balboa and Mickey Goldmill. With focus and hard work, Holgar trained Dirk into a strong player resulting in being drafted by the Dallas Mavericks. We then see Dirk lead the Mavericks to two chances at the finals, winning one of them. Once Dirk won the championship, you could see in his face that he reached the final chapter in the Holgar and Dirk story. It was a triumphant moment for both. The rest of the documentary we focus on Dirk’s family, other players, and his wife and Maverick personnel. And all these people have the same thing to say about him and that’s he is a good person, a hard worker, determined and loves the people surrounded in his life.

From this documentary and what I can see in real life, Dirk is a genuine guy who just loves the game and was never after the fame or money. He was a simple guy from a small town who is now a major superstar and a humble one at that. It’s shot very well and it has a nice clean, bright look. I loved all the sports game footage they used. It’s enthralling to see Dirk play the sport on a big screen like that. This guy will definitely leave a legacy in the NBA. 7/10
(Review by Chase Lee)