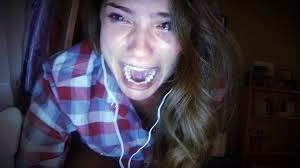 It was just a matter of time before a film like UNFRIENDED was made that played out entirely on a computer screen. Seriously, the whole entire movie. 'Ghost in the Machine' would have been an appropriate title for the 2014/2015 film release "Unfriended". The rising action takes place during a 6 (soon to be 7) way SKYPE session, exactly one year after the video taped suicide of a popular girl, who had been publicly humiliated on YouTube by way of a very embarrassing uploaded video. Hilarity, confusion and terror ensure over 80 minutes as the group moves from curiosity to confusion to apprehension and ultimately terror as, one by one, "someone" pursues a well though out plan of revenge online. Initially suspecting a living breathing prankster, they all believe suspected pals have taken over the dead friend's accounts to have a little fun at their expense, but they soon realize that this 7th party knows way to much about all of them and does not have their best interests at heart. As they begin to figure out exactly what is going on, who exactly is behind it all, how it is being accomplished and more importantly, why this is all happening, emotionally, they all begin to break down and fall apart. Over the course of the evening, secrets and lies are revealed as the friends learn that no one can be trusted and no one is loyal, even your very best pals.

Originally known as "Offline", the film was renamed Cybernatural (a la Supernatural....get it?) just in time for the 2014 Fantasia Fest. The film was also shown as "Unfriended" at SXSW in Austin amid a technological and social media coming out party of a higher order. "Unfriended" tackles the relatively recent phenomena of cyber bullying but takes it to a higher power. There have been many real reports, over the last few years, of the lengths young people will go to bully, harm and embarrass schoolmates and peers. The subject of cyber bullying is a very real and pertinent one. But this one has a bit of a twists. Usually cyber bullies are made of flesh and bone.

Meaning to appeal to the teen/young adult scream crowd, the film was pleasantly surprising and was an overall entertaining presentation. The film composition is rather creative and innovative in its formatting as the story relies on Skype, Facebook, YouTube, instant messaging, good old email and twitter interspersed with real time footage and photographs gathered on cell phone cameras and video recorders. The technological integration unfolds in a rapidly whirring barrage of clicks, uploads, downloads, copy./pastes and opened windows as the players in the 'game' come and go. While this is distracting to the viewer at times (yes, you have to read alot of the dialogue to be able to follow what is going on- there are texts, IM's and emails galore) it is rather essential to the storyline, with the huge part that modern social technology plays.

Distressing to the stalked and tormented pals is the frequent inability they have to shut down, close out, disconnect from and "unfriend" the intruder to the Skype convo. The intruder controls the communication and has a sixth sense about what the friends are thinking or are going to do, which is rather creepy, as it reads their thoughts. The sinister games, brazen manipulations and malicious revenge begins slowly and whips up a heady stormy wind by the end of the film. The panic and fear of the trapped victims who can't log off or walk away is palpable. The entity gathers their attention and eventual horrified respect as they become willing to do whatever is asked of them. The psychological drama plays out in classic horror film format, with revenge being enacted one by precious one, as the friends panic and turn on one another during an extended game of "never have i ever" , a more modern true confessions form of truth or dare.

The youthful, energetic cast is composed mostly of fresh faced actors, a few who have done a daytime drama or two, nightly series such as Teen Wolf or made appearances in minor movies such as Bling Ring and Ouija. A warning to parents. These kids free fling the profanity and are dabbling in some video sex play so pay attention to the ratings. Sadly there were many kids are the screening who One, couldn't read, Two, shouldn't hear the language, Three, had no business viewing the provocative scenes and Four, were too young to be forced into seeing scary scenes with moderate bloody violence. Keep the youngsters at home. While they will relate to and be familiar with all of the social mediums, the way they are being used is not something appropriate for younger eyes and ears. It is a bit of scary fun but as usual wondering, were there really no adults home at any of the six houses anywhere that night to hear all the screaming and yelling? Nope, not a one. And no parents were called...........
(Review by Cheryl Wurtz)