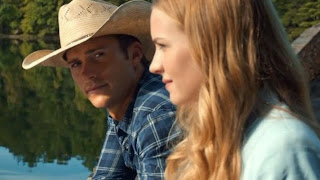 There is no arguing that Mr. Sparks definitely has a formula to his stories. We can expect to have a young romance, hand written letters, and star crossed lovers. Is having a formula necessarily a bad thing? Formulas are used because they are proven to work. Mr. Sparks has developed a successful and impressive brand enjoyed by over 100 million readers worldwide. Respect!

Once a Hollywood staple, it is very rare now to see films in the romance or romantic comedy genre. We could all probably rattle off the "best of" list from the last 20 years. We only see a handful of films per year that fit into this category. So when they appear, for better and for worse, they are a huge hit since 51% of all movie tickets are purchased by women. In general, we need to see more films with strong female leads, in all ages groups, that are filled with laughter and positive examples.

The Longest Ride was adapted to the screen by Craig Bolotin (screenwriter), and Temple Hill power house producers Marty Bowen and Wyck Godfrey of the Twilight series and The Fault in Our Stars. I believe they have another success story to add to their ever growing movie list. Only a handful of films have dealt with bull riding and we have not seen one in some years. The Longest Ride combines two rarely taped markets in a well balanced film for both men and women.

Sparks relates his love stories through flashbacks over a defined period of time. In the case of The Longest Ride, we have two love stories intertwined. We get to watch both couples fall in love, one in modern times and one that begins in 1940. From two different worlds, Sophia (Britt Robertson), an art major in college, and Luke (Scott Eastwood), a professional bull rider, meet and fall in love. During this process, their path crosses with Ira (Alan Alda/Jack Houston) from whom they learn the true meaning of love as Ira imparts wisdom from his life with his beloved Ruth (Oona Chaplin). The film's basic theme is that love is not only about passion but more importantly sacrifice. Mr. Sparks shows us both young and mature love which is refreshing and eye opening. Through the characters of Ruth and Ira, we get to see how love changes with time, what life challenges it brings, what sustains it, and how it endures.
I found it interesting to learn what brought everyone on board with this project. Director George Tillman, Jr. was drawn to this story because it reminded him of his own love story and 25 year marriage. Scott Eastwood liked that there is a heavy dose testosterone because of the bull riding along with a love story. Britt Robertson was drawn to the young, strong female lead who is trying to figure out what she wants in her life a career, a hot guy or both. We discussed how Mr. Sparks always writes female characters that have power to figure out their own destinies and who they choose to love despite what the social constraints are of the time in which they live.

All of Mr. Sparks stories have messages (sometimes found in a bottle) and teach life lessons. Usually, there is one character that stands out as the teacher. In this film, there are two teachers, Ira and Ruth. Ira imparts wisdom to Sophia and Luke through sharing his life experiences. The talented Oona Chaplin plays Ruth a strong willed, post WWII elementary school math teacher who loves art, kids, and astronomy. It is nice to see him promote education in his novels and as he does in real life. It deserves to be recognized that in 2011, Mr. Sparks established the Nicholas Sparks Foundation to promote education worldwide.

Britt Robertson is an actress to watch. She is kind, driven, talented, and very smart. You may have seen her in various TV series like Under the Dome. Next up for her will be Director Brad Bird's Tomorrowland, a much anticipated Sci-Fi action thriller which stars George Clooney.

Scott Eastwood is fast becoming type cast as a true Hollywood heartthrob. With his recent steamy performances in Dawn Patrol and in The Longest Ride, he certainly rivals all others who have been touted as the "sexiest men alive." Just go ahead and put him up there with James Dean in Giant and Brad Pitt in Thelma & Louise. And while his sex symbol status is certainly well deserved, it would be remiss to overlook his acting prowess. Mr. Eastwood career has been impressive with diverse and intense films such as Fury, Invictus, and Flags of Our Fathers. Mr. Eastwood has upcoming roles in Snowden and DC Comics film adaption of Wonder Woman.

No matter who you are in Hollywood, it takes a while to get noticed and become a recognizable name. During our interview we spoke about what it meant for Britt Robertson and Scott Eastwood to play the characters of Sophia and Luke and more importantly what these roles can do for their future. The Longest Ride will certainly be a hit and help catapult their acting careers to another level. Once this happens, they will have more control in choosing and creating their own projects. I hope the best for Britt Robertson and Scott Eastwood. It will be a pleasure to watch their careers flourish.

We all have those movies that we keep on rotation and watch over and over. Affectionately, these movies are our "comfort entertainment." During our interview, I was reminded what a huge difference there is in what a guy and girl consider to be a "comfort" movie: for Britt Robertson, her go to film is Pretty Woman; for Scott Eastwood, it is Braveheart; and for Nicholas Sparks, it is The Green Mile. For me, I think I will be adding The Longest Ride into my "comfort" rotation. And with that this Texas girl says, "Hold on to your hats and enjoy The Longest Ride!". 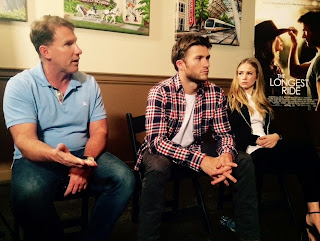