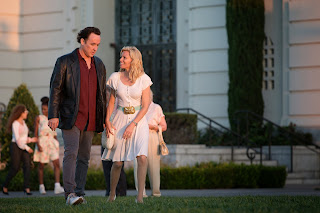 What an emotionally jolting film. “Love and Mercy” tells the story of Brian Wilson, the Beach Boys leader, in two stages of his life. We are taken through the effects of his psychiatric disorder and his musical genius. His character is one who had experienced a lot of traumatic relationships with people including his father and also his doctor in a later part of his life. There is also a delicate love story intertwined in this piece. Close to the beginning of the film there is a scene depicting Wilson’s mental instability. He tells a care saleswoman he’s just met that his wife had left him while she is kind of thrown off by it. I really saw the image of Wilson’s emotional deterioration in that scene. When the woman finds a card stating Wilson’s feelings in the car, my thoughts were confirmed. That scene brilliantly starts the revealing of the harmful life Wilson was living. He also experienced uncontrollable voices and sounds in his head. To serve the disrupting chaos of what it was like there are multiple scenes which blare the sounds off in the theater. We are really made to learn about how this psychiatric disorder obstructed some happiness from Wilson’s life. Paul Giamatti plays the cruel and himself insane doctor who is Wilson’s caretaker. What was incredibly uncomfortable was a scene when Giamatti screams at Cusack, the actor playing older Brian Wilson, for being impatient about eating a burger. This was even when Wilson’s love interest, played by Elizabeth Banks, insists on him eating it because he’s so hungry. We are just put into that frightening dysfunctionality of the domestic home in that scene. There was also a time when you see Cusack’s character at the piano sweaty and tired being forced to repetitively play a song from his doctor. I can’t imagine how mentally piercing that would have been to Mr. Wilson. He is portrayed as being trapped in a sick situation with this horrible person. There are also some focuses on the great parts of Wilson’s life too. His hearing for sounds that derive from his mass producing mind comes into the talented musicians he works with. The recapturing of the out of the norm feats that Wilson brings is absolutely spot on. His father did not appreciate his music or him for that matter consistently beating him as a child. We are still though with this film taken to a superb mind that came with a lot of baggage but brought love with it too.
(Review by Wyatt Head)