I'll See You In My Dreams 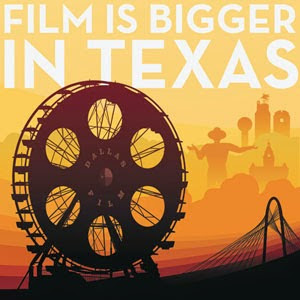 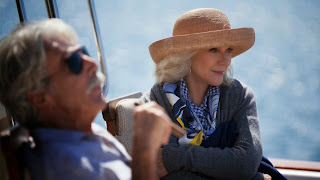 Blythe Danner is a shining example of how to grow older with grace and style. In writer/director Brett Haley's second feature film (2010's The New Year) shows that just because one is aging doesn't mean that your life is over. Set in a pretty neighborhood of Los Angeles, Blythe plays Carol who lives alone in a very nice house, nice furnishings, with no worries of how to pay bills or go golfing. She wakes to an alarm, putters around the house, go for walks, plays cards with her friends at the retirement home, and drinks lots and lots of wine. Everyday, it's the same thing.

Carol's husband had died in a plane crash 20 years ago and the former singer then school teacher has been living off her husband's pension. Her quiet existence is upset when her 14 year old dog has to be put to sleep. Her logical mind knows it was for the best, but it has still left a small hole in her life. She befriends the pool boy Lloyd (Martin Starr) an aimless 30 year old wanna be songwriter who now lives with his mom. They spend some time together drinking wine and he ends up taking her to a karaoke bar and discovers she has a beautiful voice.

Her good friends Georgina (June Squibb), Sally (Rhea Perlman) and Rona (Mary Kay Place) try to talk her into moving to the retirement community. But Carol loves her home. Sally encourages her to go to speed dating which reaffirms Carol that she's probably good just the way she is at the moment. That is until he cute meets Bill (Sam Elliott) who asks her out to lunch. He's handsome, laid back and chomps on a cigar that he never lights. Carol has never considered dating anyone since her husband and suddenly is secretly smiling at the complimentary attention. Bill with the twinkle in his eye is deeply sincere with Carol, making her wonder if she wants to wash someone else's underwear.

The slow meanderings of Carol's daily life is punctuated by the deadpan Lloyd and their wine infused conversation on life's uncertainties. There is also some very amusing moments when the ladies do some medical marijuana which is quiet funny without being embarrassingly slapstick. Malin Akerman comes in during the later part of the movie as Carol's daughter who lives in New York. They have some touching daughter/mother moments that remind us no to take our parents for granted. Then there is the rat that keeps showing up. Danner's performance is impressive reminding us that women of a certain age are still vibrant, funny, with many stories to tell.
(Review by reesa)

Email ThisBlogThis!Share to TwitterShare to FacebookShare to Pinterest
Labels: DIFF 2015, I'll See You In My Dreams review