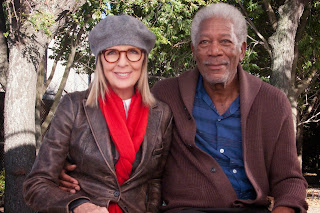 I don’t hate this movie but I think your grandparents would enjoy it a lot more. It’s a feel good movie about life and it makes you appreciate your life now and makes you look forward to your older years. However, I won’t remember this movie within a week. That’s my biggest complaint is that it’s forgettable.

Director Richard Loncraine has one main job on set and that’s to get the greatest performances out of his actors. Did he do that? Yes, he did and Freeman and Keaton have great chemistry.

*Side comment: This is Morgan Freeman’s best performance in years and he didn’t feel like he just took a paycheck, but then again if your are Morgan Freeman you can do anything.

Loncraine really does create a natural and loving relationship between the two actors and I felt I was watching a real couple. The relationship had great characters as Morgan Freeman had a self-contained, quiet personality and Diane Keaton had a more outgoing personality. I looked at it as Freeman was a pessimist and Keaton was an optimist. It was a good pair and Loncraine should be proud of that. That’s the highest praise I can give it. The story was simple, though with good, genuine dialogue and there was really nothing new. The couple is selling their home with the help of their niece, played by Cynthia Nixon, to start a new adventure in life somewhere else. The movie takes course over a weekend with selling and bidding from a lot of people and that’s it. The one thing that annoyed me was there was a terrorist sub plot going around the city as all was happening. You read that right. It felt out of place and I understood the metaphor it was going for as Morgan Freeman explains it at the end, but it still felt like that one rude, drunk guy that no one invited to the party and you find out he was just a random guy with no business there and ruining everyone’s time. With a story this simple, I do appreciate the flashbacks to when the couple was younger and we got to just see their characters expand in depth more. Also, there is a dog placed in there for emotional hijacking of your soul. I just figure I would a good citizen and warn you.

The acting as stated from Freeman and Keaton were charming and I could feel like they have been a couple married for forty years; but, dear lord, why was everyone else below the age forty completely unwatchable? Everyone, I am not exaggerating, is selfish, rude, entitled and frankly…a jackass. It makes you wonder why everyone was so unlikeable and the two leads were perceived as good, loving people. Was it maybe to show how far gone and self-centered the youth of today is? Cynthia Dixon plays their real estate agent and she is just as bad. I hated her from the get go.

The cinematography was nothing spectacular. It was a clean film and had almost every scene filled with a lot of sunlight. It was probably the director telling us the couple was the only bright spot of the film. I had twelve writers write that joke.

The editing was fine. It was an hour and half long and it was short, sweet and to the point. At the end of this crazy real estate game, it’s heartwarming and you want to give your significant other a hug and kiss. But, if you are like and have no one you hug and kiss your pillow. I know what you are thinking with that statement, and yes, I have a lot of friends.

Overall: It’s a simple story with good dialogue that has two great leads with beautiful and humble chemistry. It’s cute, charming and sweet and I won’t remember it by Christmas, but I think an older audience will love it. 6/10
(Review by Chase Lee)