DIFF2015: Raiders! The Greatest Fan Film Ever Made to Play 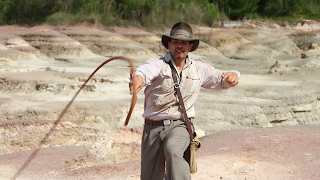 his is the delightful story of two friends who see a monumental film of action and have the ambition to make a copy of their own. This piece was so detailed it was an easy feat to watch. The group of boys make a copy of “Indiana Jones: Raiders of the Lost Ark” in their own back yards and houses starting at age eleven. They continue for seven years but end up having a falling out due to relationships and chosen paths of life. The two main buddies vow to never see each other again. For Eric, one of the original duo, this film is an escape from a bad divorce into a fantasy land. His mother thinks the dysfunction breeds creativity. His pal, Chris, is living with a mother trying to support his family which is barely surviving. I was taken away by the things the boys did in their houses for the project they were making. They repeatedly set fire to their basements for certain scene recreations. The point in the film where it was revealed that their parent-approved adult supervisor let them light the place up was hilarious. The film depicted the boys setting fire to each other which to me stated their commitment to this incredibly involved project. Chris, later in his adulthood, decides to go a responsible route of getting a full-time job while Eric becomes a drug addict. Eric finally comes to a better situation. Chris, during the filming of the documentary, gets repeated calls from his boss which is putting him at risk with his job for completing this childhood film. The duo as well as another third person who was involved from the beginning decides to do the infamous plane scene as adults that they had left out. There was a close up shot of Chris’ conversation with his boss from work which directly related the audience to his conflicting mindset. He was torn apart from completing his hugely impactful to him movie and going back to work to satisfy his boss. The people involved in this final plane scene also experience the delay of rainy days and insufficient props. Everybody is shown to be putting their full effort into this last hoorah. There is actually a plane that is constructed cheaply by a master craftsman which is supposed to be blown up. The pyrotechnics expert is filmed while he slowly approaches a malfunctioning blow up and gets thrown back by the delayed explosion. Everybody in the audience as well as on screen is incredibly scared for this man. Yet when he says “Did we get the shot?” there was a huge wave of gladness over the audience. This film is a massive exhibition of creativity and guts that is displayed by kids who just loved to death a piece of cinema.
(Review by Wyatt Head)

Email ThisBlogThis!Share to TwitterShare to FacebookShare to Pinterest
Labels: DIFF2015, Raiders! The Greatest Fan Film Ever Made to Play review, Wyatt Head