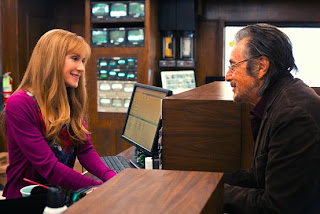 This was the first type of film like this I saw. It was sort of dark but not in a horror type of way. Manglehorn is a man played by Al Pacino who owns a key shop and lives an unfulfilling life. He has this obsession over a woman he had previously known and cannot shake it off. He also is a frequent visitor of the bank and likes the cashier played by Holly Hunter. He has a son who became estranged from him and is a successful business man in a high rise. The story looks at this sort of tormented mind of Manglehorn and how he is trying to break free from his loneliness. His obsession with the woman is brought to us at a level just below insanity. The compulsive thinking of Manglehorn about this past love is solidly put on screen. I think this script did a good job of taking that mindset of a person that may not be as uncommon as one thinks. There is a moment where Manglehorn wants to be with the specific cashier even though there is an open one already. I really thought that that early revealing of interest to Hunter’s character was a smart move. Both characters are around the same dating age and Hunter is a pretty woman so it was a realistic potential relationship. Manglehorn also has an old student in his life who is an ex-drug addict and is annoying to him. There’s a scene where Manglehorn just asks him to shut up while he just keeps on talking and talking. That was a time when the lead’s unsatisfied feeling of living is stated. It was perfectly shot at a slot machine in a dimly lit bar which provided the backdrop for Manglehorn’s conscience. He also has a violent fit of rage triggered by a bowl breaking during the first time the audience sees his house. He is in such a rut in his mind. Pacino actively turns on a melancholy attitude for this role and it fits in just like a key. During a scene when Pacino and Hunter’s characters date for the first time Hunter says that she has a love of people. She says one of the best lines of the film that goes something like “When I see the water out of the faucet, I am happy.” Unfortunately because of Manglehorn’s attitude the woman feels upset and leaves straight up from the table. When I saw that I just thought about the missed opportunity for companionship that the lead blew off. This is a well written story that is gloomy and dispirited. During the whole film one hopes for clear skies to enter Manglehorn’s life.
(Review by Wyatt Head)