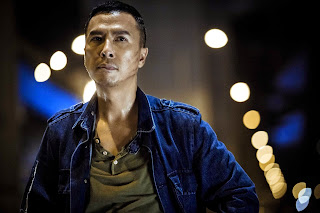 Also known as Kung Fu Jungle. This 2014 Hong Kong/Chinese action thriller directed by the great Teddy Chan was recently screened at the 2015 Dallas International Film Festival just before it's U.S. theatrical release. It won the Hong Kong Film Award for Best Action Choreography which was given to Donnie Yen who also stars in the movie. He's won this award four times previously.

Yen plays (Hahou Mo) who is a martial arts expert and a police self-defense instructor. He comes into the police station all beat up and confesses to killing someone. He goes to prison, but one day while watching the news on TV, he tries to demand to talk to the inspector in charge of the case involving a car accident and murder. On the victim was a sharp knife shaped as a swallow. Unfortunately he can't get the guards to help him out. So he instigates a fight among a new gang of inmates. The opening fight is worth the price of admission. Mo takes on 17 men in some pretty inventive fight sequences, some of which look like they really hurt. When Madame Inspector Luk Yuen-Sum (Charlie Yeung) shows up, he proposes to help her find the killer if they will let him out of prison. He tells her he knows the motive and gives her names of the next victims. Of course it isn't until one of the names shows up dead that Luk decides to take Mo up on his offer.

The movie involves Mo's need to redeem himself for his error of using Martial Arts to prove who is the best. He reunites with his girlfriend Sinn Ying (Bing Bai) who still works at the martial arts school. The vicious killer (Wang Baoqiang) has a atrophied leg, but was obsessed with training. After his wife dies of cancer, he becomes even more determined to prove that he's number one. The swallows are an ancient symbol given to losers of martial arts fights. Somewhere along the way, Mo becomes a suspect when the police think he is working with the killer to get him out of prison.

There are lots of cameos galore in the film and guest appearances, that unless you are familiar with Hong Kong action films, you will probably be lost. But the end of the film gives a nod to everyone even though you still may not know who they are. The fighting is what you came to see anyways, and there are some amazing battles. The killer goes through each of the masters of a particular discipline, like boxing, grappling, or swords. The climatic encounter between Wang and Yen on a busy highway is over the top but still a wonder. There's no doubt why Yen won for his action direction.
(Review by reesa)