The Clouds of Sils Maria 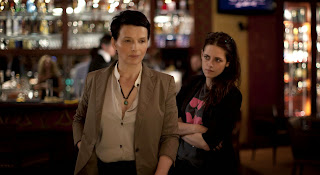 This 2014 French/English film written and directed by Olivier Assayas was selected for the main competition section at the 2014 Cannes Film Festival, screened at the Toronto International Film Festival and the New York Film Festival. It won the Louis Delluc Prize for Best Film and Kristen Stewart became the first American actress to win the César Award. The film is sort of an abstract discussion regarding ageing, culture, and acting with the roles of a play and real life seem intertwined.

Juliette Binoche plays Maria Enders, a middle aged popular actress who is on her way to Zurich with her assistant Valentine (Kristen Stewart). Maria is supposed to accept an award on behalf of playwright Wilhelm Melchior. As a young actress Maria was cast in the play and film versions of Maloja Snake by Wilhelm about a tempestuous relationship between and older woman and a young girl that made her career sky rocket. But before she arrives she hears that Wilhelm has just passed away and everyone considers cancelling the ceremony, but despite her sadness she carries on. Director Klaus Diesterweg (Lars Eidinger) proposes that Maria perform in a revival of the play as the older woman Helena. Maria was totally invested in the younger woman part of Segrid and doesn't think she can do it. Klaus wants to cast Jo-Ann Ellis (Chloë Grace Moretz) an up and coming American actress who has a tabloid reputation for getting in trouble. Valentine thinks that Jo-Ann is potentially brilliant and tries to get Maria to see her in a new light.

Wilhelm's widow Rosa (Angela Winkler) offers their home in Sils Maria so that Maria can rehearse the play. The beautiful cottage in the Swiss Alps is a perfect backdrop for the long wordy scenes while Valentine runs lines with Maria. At times it seems they are just playing their own relationship until Valentine reads the stage directions. They spend time hiking and talking and talking. There are overlaps of reality and art. Valentine defends Jo-Ann's talent despite her online burn outs. It's an often muddled yet fascinating examination and endless intellectualism on acting, ageing and acceptance. Maria fights hard as Valentine tries to get her to realized that Helena's role in the play is the humanity of the story while Maria clings to her youthful portrayal of Segrid.

The clouds in the name of the story are actually known as the Maloja Snake. It's a weather wonder of rolling clouds that form over the mountain pass from Italy to Switzerland that flow over the lake and lands unfurling like a snake. That's the way the film feels to the viewers. A glimpse of the obsessive self examination of actors and their lives. Interesting, well played, beautifully photographed but probably not for everyone.
(Review by reesa)

Email ThisBlogThis!Share to TwitterShare to FacebookShare to Pinterest
Labels: The Clouds of Sis Maria review