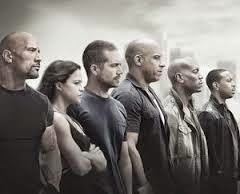 The newest in the Fast and Furious franchise assumes the viewer is familiar with the history of the characters and story lines. However, newbies to the series don't necessarily need the backstory to enjoy the high octane and improbable mayhem that ensues. Director James Wan (Insidious, Saw) and writer Chris Morgan load the movie with bare dialogue and some over the top action sequences. There was small worry how they would handle the death of Paul Walker who passed during the filming of the movie. His brothers Caleb and Cody Walker were used as stand-ins to complete the remaining scenes. The tribute at the end of the movie practically brought a tear to the eye.

The movie opens shortly after the adventures in Fast & Furious 6 when Jason Statham shows up at the end killing off Han (Sung Kang). Statham plays Deckard Shaw an ex- British Special Forces assassin and brother of Owen Shaw (Luke Evans) who was seriously damaged in the previous film. He is out to get revenge on whomever did this to his brother. His first stop is Agent Luke Hobbs (Dwayne Johnson) who ends up falling out a window saving a fellow agent Elena (Elsa Pataky) breaking bones by landing on a car. He lets Dom (Vin Diesel) know that someone is out for the “family”. OK, you need to know the family is a loose group of multi-racial characters who formed a bond from the previous films that unite and take care of each other. Dom's sister Mia (Jordana Brewster) is married to Dom's former enemy and now best friend Brian (Paul Walker). Brian is trying to adjust leading a normal life complete with mini-van while raising their son. Letty (Michelle Rodriguez) is suffering from amnesia and doesn't remember being married to Dom and wants to go off on her own to discover herself. Roman (Tyrese Gibson) and Tej (Ludacris) come together after Dom's house is blown up by Deckard.

Enter Frank (Kurt Russell) a covert operative who fills Dom in on Deckard. He promises to help Dom locate Deckard in exchange for him rescuing a hostage hacker who wrote a computer program called “Gods Eye” that can use everyone's cell phones and computers to track down people. He will let Dom use God's Eye before turning it over to the government. Dom's crew plans an amazing rescue that involves dropping cars out a plane and landing on a narrow mountain road. You have to see to be amazed. Once they have Ramsey (Nathalie Emmanuel) who was kidnapped by Jakande (Djimon Hounsou), they find that the flash drive was sold to a Dubai prince. This adventure leads to a car crashing from one skyscraper to another. Again...must see to believe. Eventually the adventure moves back to the streets of LA where even more chaos, cars, and creative crashes occur.

The film definitely delivers with mindless madness worthy of the Fast and Furious name. There are plenty of the gratuitous barely there bikini dressed women (because apparently that's what one wears to street races), loud flashy cars, the roar of engines and lots a attitude. Just watching beefcake Dwayne Johnson bust out of a shoulder to wrist cast just by flexing his muscle is pretty cool. Tony Jaa's fights with Paul Walker are pretty wild and hope we more of Jaa in American films. How they will continue filming more of the movies with that absence of Paul Walker remains to be seen. If this is the end, it's a good send off.
(Review by reesa)