DIFF2015: The Jones Family Will Make a Way 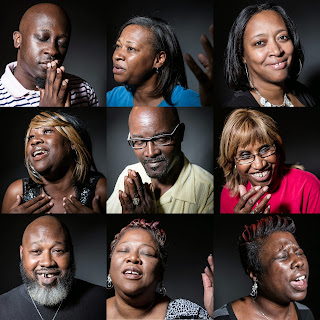 Unless you are from the Biblebelt most people are not that familiar with gospel music, nor do they listen to it on a regular basis. Director Alan Berg's documentary of the Jones Family Pentalcostal choir will certainly change your minds and have you bouncing in your seats.

In rural Texas, preacher Dr. F. Allen Jones, trained his family of 3 generations to sing at the church services. His philosophy in teaching them was extreme, “if you don't do it right, then you don't do it”. His wife had commented that if she had known he was going to be a preacher, she would not have married him, but his singing got her attention. She already had children at the time they were married, and they had more together. The combined families made for some joyful music. They took their show on the road winning gospel competitions. It wasn't until rock critic and Grammy nominated gospel historian Michael Corcoran became their most influential fan. He saw them as a throw back to the 50's style of singers that spawned Jerry Lee Lewis and Elvis. He encouraged small clubs in Austin to book them. Then with the help of indie rock veterans John Crosline and Eric Friend, they helped the family produce an album.

The journey to their success is told by filmmaker Alan Berg who was asked by Corcoran to film their first SXSW showcase in 2012. He was intrigued enough to tell their over 30 year struggle featuring the stories of the siblings and parents who are modest as well as nattily dressed. Their years of performing are told in various video over the years from their church services. The music written and performed by the family is awe inspiring even for people who are atheists like Corcoran. It's hard not to sit still listening to their rock and soul beats and singing that feels like it's coming from their very life souls. The theater of their music performance brings you to your feet.

Their showcase performance at 2014 SXSW caught the attention of Lincoln Center programmer Bill Bragin who booked them at the Center's summer concert series. Since then, the family has performed at numerous music festivals and venues all around the world. Some of the family were present during the Q&A after the screening at the 2015 Dallas International Film Festival where they sang an impromptu performance, making us feel all blessed.
(Review by reesa)

Email ThisBlogThis!Share to TwitterShare to FacebookShare to Pinterest
Labels: DIFF2015, The Jones Family Will Make a Way review