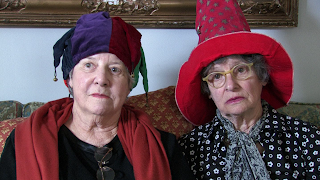 Mary Louise Wilson is not exactly a household name, but the Tony winning actress has spend more than 50 years as a versatile stage and screen star. When she won another Tony for her 2007 musical role in Grey Gardens, she reports afterwards “I never worked again”. The offers dried up as producers thought she would ask for more money. So she moves back to New Orleans where she was born and raised to teach Character Acting at Tulane University.

Director Ron Nyswaner follows Ms. Wilson as she asks to be called, or Mary Louise, whatever. Never having taught a class on acting she refers back to her own acting mentor Sanford Meisner. She puts her class though repetitive exercises that confuse and dismay her students. The obtuse instruction to connect with feelings seems baffling. Ms. Wilson admits that she is uncomfortable speaking without memorized lines. The class of aspiring young thespians seem game to try and accept the criticisms as Ms. Wilson explores the concept of being in the moment and finding their real emotional selves. It's hard to say if anyone actually improved as a result. The Tulane students are all sure that this is what they want out of life. Acting is the only thing they know how to do. Although the interviews of the students were filmed a year after their class with Ms. Wilson, it would have been nice to know if they actually got anything useful out her class.

The film is filled with archival footage from Ms. Wilson's long career. She is quite a character herself with some self effacing analysis. She speaks lovingly about her tormented gay brother who took her under his wing when she moved to New York and her older sister who acted in community theater, who passed during the filming of this movie. She barely notes her short lived marriage and some realization that she found herself to be an alcoholic. The stories of moving to LA to pursue television roles made her miserable but she admits that she didn't really want to be there.

There are brief talking head interviews with many established older actresses including Frances McDormand, Estelle Parsons, Tyne Daly, Valerie Harper, Mary Birdsong and Charlotte Rae. They discuss their own process and craft of their profession. The rewards and sacrifices they have had over the years, their own talents to lose themselves into their characters. McDormand says that she didn't learn that from acting class in college. Most agree that you either have it or not.

Ms. Wilson obviously still has it as she is currently performing On the Twentieth Century, singing and dancing at the ripe young age of 83.
(Review by reesa)

Email ThisBlogThis!Share to TwitterShare to FacebookShare to Pinterest
Labels: DIFF2015, She's the Best Thing In It review