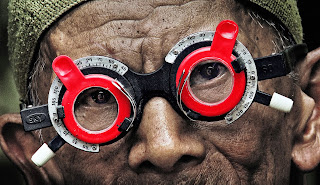 There are many horrific things that happen all over the world due to dictatorships. When one can see the people who cause this horror it becomes 1000 percent more at home. In “The Look of Silence” an Indonesian whose brother was killed in the anti-communist massacre of the 60’s interviews his fellow victims and killers from the event. The first reality check I got was seeing the main person’s father old, crippled, thin to the ribs, and mentally effected. It was so depressing to understand what environment the family was living in. Indonesia is currently under the same military dictatorship that murdered over a 1 million people back 50 years ago. We see a family that has had basically all dignity taken away from them. The 1 million suspected “communists” were really just farmers and the poor. They were accused of not having a religion and having sex with each other’s’ spouses. The lead points out right to the faces of the killers he interviews that these rumors were all propaganda. The most angering part besides the descriptions of the brutal murders was that an NBC American news anchor went to the country and believed the lies he was told. He was essentially on the side of the military power heads. The children today are told lies in that country about how the communists captured military commanders and killed them horrifically. I felt so sick for the children not being able to speak the truth in their own classrooms. This film made the person who takes for granted their free country totally grateful for what they have or so I hope. A survivor of the mass murder talks to the camera and says that people were afraid to look at the prisoners walking down the street about to be killed. I can just imagine the piercing feeling of all of the townspeople when that was going on. The lead’s brother was beheaded by a machete by a killer whom he interviews. There is a searing and suspenseful stare from the lead to the killer of his brother. You can see the eyes start to water and the gulp of saliva that signals emotional turmoil and fear. The killers describe in one shot the gruesome cutting of a breast to reveal holes in it like a “coconut water filter”. The killers to the absolute shock of the audience say they deserve a cruise for what they did to the “communists”. The sociopathic attitudes come to a full frontal in this highly disrupting film. Although having watched what I just watched, maybe it is right to do what is mentioned in the film and leave to God what happens to these sadistic killers.
(Review by Wyatt Head)