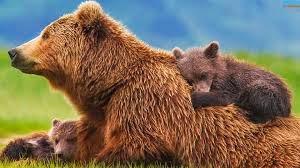 Disneynature's annual Earth Day documentary presents Bears this time around. Directors Alastair Fothergill and Keith Scholey who also did Chimpanzee and African Cats once more offer fascinating and stunning visuals while anthropomorphizing the animals with human names and motivations. Really, who doesn't like bears? They seem sweet, cuddly and playful. Every kid has at least one stuffed bear at some point in their life. Narrated by John C. Reilly who gives a light and cheerful tone to the adventures of a mama bear and her two cubs of their first year.

Reilly gives names to the mama as Sky and her cubs born during the winter hibernation, which for the child audience sake are called Amber and Scout. The close intimate shots inside their den of the new born cubs is quite an incredible feat from the filmmakers. As the winter ends, it's time for the bears to migrate to the coast to eat the 90 pounds of fish a day to store up for the next long sleep. Filmed at the Katmai National Park in Alaska, the scenery and mountain vistas remind us that these natural wonders should be preserved and not exploited. There are some great footage of an avalanche barrelling down the mountain moving 80 miles per hour.

The film gives personality and voice to the playful cubs as they frolic and discover their new world. We also see how large they grow during their trek down the mountain to the mud flats along the rivers. The bears wait for the salmon to come for their own annual migration from the ocean to the river mouth as they return to the spawning grounds. Mama Sky has to keep her cubs safe from the big male bears who are hungry for anything including some tasty cubs. She moves them to familiar spots that she was once brought by her own mother for safety and for clams and mussels that can be found during the low tides. We are also shown as bears move rocks to find the rock eels under them that the bears also feast upon.

Salmon after travelling from the ocean must wait until they acclimate themselves to the fresh water river mouths. The bears waiting for their arrival feed on them until they eventually move upstream. Eventually they will fight against the currents and waterfalls to where they were hatched guided by their olfactory senses that can be 30 miles from the ocean. Reilly tells us that this is the Golden Pond where Sky and cubs must travel. It's taken weeks to get there and mother bear is noticeably thinner as she is nursing her cubs along the way. She needs to eat to survive through the 6 month hibernation while feeding her babies. The cubs will stay with her for 2 years.

There are some tough moments for the little viewers as the film shows some crisis moments of one of the cubs stranded as the tide comes rises. Or when the big male bear fights the mother then goes after one of cubs. They are also threatened by a wolf. For once, Disney doesn't kill off the mom like it does for their animated stories for the sake of drama. In fact the mother is made even more heroic as she guides her young ones through their first year before heading back to their winter's den in the snow covered mountains. More for Mother's Day than Earth Day. Stay and watch the behind the scenes shots during the credits.
(Review by reesa)